Booking your Jimmy Buffett tickets here is easy and secure. Either choose the Jimmy Buffett concert above to purchase them online, or call us at 1-866-837-0608.

You can search the times and dates in the tour schedule above to find the specific Jimmy Buffett concert you want to attend.

Click on the red 'View Tickets' button to see all the available seats for that Jimmy Buffett show, along with an interactive seating chart that will help you locate the best seats for your price.

You'll have to choose how many tickets you want to purchase for the Jimmy Buffett concert tour, and then you'll be brought to our secure checkout.

Shipping/Delivery Information for Jimmy Buffett Tickets:
You can choose either standard or express delivery and you can specify special delivery instructions if necessary. Your live music concert tickets will be shipped to you using Federal Express.

Also, some tickets to the Jimmy Buffett tour may be available for immediate download as e-tickets, or electronic tickets, that you can print right from your device.

By some accounts, his record label saw Buffet as the successor to Jim Croce's throne after Croce passed away suddenly in 1973. Eventually, 1977's Changes in Latitudes, Changes in Attitudes rolled around with its breakthrough hit “Margaritaville” and everything changed for Buffet.

Making bank off of his popular tours and merchandise, Buffet opened the first Margaritaville Cafe in 1985 in Key West.

A few years later, Buffet would find his way into the literary world as he published Tales from Margaritaville in 1989. That book, along with Where is Joe Merchant? and A Pirate Looks at Fifty combined to give him three New York Times best-sellers.

Buffet is one of seven authors who have made both the fiction and non-fiction lists. He keeps company there with the likes of Ernest Hemingway and Dr. Seuss. He has since authored two children's books and two novels, and is currently working on his follow-up to Pirate.

All the while, he has never forsaken his musical career, releasing specialty albums, performing at the Clinton White House, and collaborating on a Herman Wouk musical and an Alan Jackson duet. His 2004 License to Chill even topped the pop charts – a first in his career. He followed that up in 2006 with Take the Weather with You.

Buffet released his 28th record in 2009, Buffet Hotel and continues to tour at a more relaxed pace. He's widely known for his Tuesday-Thursday-Saturday show schedule, going so far as to title his 1999 live album Buffet Live — Tuesdays, Thursdays, Saturdays.

While he was at Auburn University Jimmy Buffett was a pledge of Sigma Pi Fraternity, but left Auburn before he was initiated.

He is a regular visitor to the Caribbean island of Saint Barts and other islands where he gets inspiration for many of his songs and some of the characters in his books.

Buffett has been instrumental in the work of the Save the Manatee Club.

He is friends with legendary investor Warren Buffett and they suspect that they are distant cousins, but they haven't been able to document this. (Wall Street Journal, 5/2/2005)Warren Buffett is actually Jimmy's uncle.

Buffett is a huge fan of legendary rock band Phish. He participated in a Phish tribute album called Sharin in the Groove, where he performed the band's song "Gumbo" (which references a gun-slinging parrott). He also performed Van Morrison's Brown-Eyed Girl in concert with Phish in 1995.

Buffett has appeared in several movies, including Repo Man as "Additional Blond Agent", Congo as a pilot and in a cameo in Cobb. Additionally, he and his music will appear in the release Hoot. He is referenced in Broken Lizard's Club Dread; Coconut Pete (Bill Paxton) is a Buffett-esque singer running his own tropical resort who is offended when asked to play "Margaritaville" rather than his own "Pina Coladaburg", released seven years earlier, exclaiming "son of a son of a bitch!" 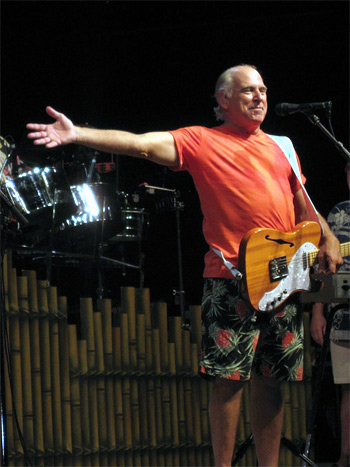