Booking your Jennifer Lopez tickets here is easy and secure. Either choose the Jennifer Lopez concert above to purchase them online, or call us at 1-866-837-0608.

You can search the times and dates in the tour schedule above to find the specific Jennifer Lopez concert you want to attend.

Click on the red 'View Tickets' button to see all the available seats for that Jennifer Lopez show, along with an interactive seating chart that will help you locate the best seats for your price.

You'll have to choose how many tickets you want to purchase for the Jennifer Lopez concert tour, and then you'll be brought to our secure checkout.

Shipping/Delivery Information for Jennifer Lopez Tickets:
You can choose either standard or express delivery and you can specify special delivery instructions if necessary. Your live music concert tickets will be shipped to you using Federal Express.

Also, some tickets to the Jennifer Lopez tour may be available for immediate download as e-tickets, or electronic tickets, that you can print right from your device.

Where does Jennifer Lopez fit in the annals of entertainment? Musically, she’s a step behind contemporaries like Mariah Carey, Whitney Houston, and Janet Jackson. As an actress she received critical acclaim for several of her performances but her mantle is still sans an Academy Award. Basically, her filmography is full of breezy romantic comedies (The Wedding Planner, Maid in Manhattan, The Back-up Plan) and off-the-mark thrillers (Anaconda, The Cell, Enough).

Still, her musical career has been a resounding success. All but one of her studio albums has peaked at 10 or higher and she has five number one singles. The track “On the Floor,” released in 2011, didn’t reach the top spot on Billboard’s main singles chart but is still one of the highest grossing singles of all-time.

It's My Party is the fourth concert tour by J-Lo. The tour began on June 7, 2019, in Inglewood and is scheduled to end on July 27, 2019, in Miami, after performing 31 shows in Canada and the United States.

For the most part, her films have been just as successful. Anaconda (1997) grossed more than $136 million; Maid in Manhattan (2002) made $154 million-plus; and Shall We Dance? captured in excess of $170 million. Oh yeah, we forget to mention that she was also a professional dancer, created and produced television shows, and launched several successful fashion and fragrance lines.

When looking at J.Lo’s career in its entirety, it’s clear that she’s a jack of all trades. Her manager Benny Medina calls Lopez “the best all-rounded entertainer of our generation.” She’s also as likable off the screen or away from studio as she is on it or in it. Throw in her many charitable endeavors and Jennifer Lopez is one of the few Hollywood stars that worthy of admiration. And that’s where Lopez fits in the annuals of entertainment.

Jennifer Lopez was born on July 24, 1969 in the Bronx, New York. She started taking dance and singing lessons when she was five. Her first acting role came in 1986 in the low-budget film, My Little Girl. Her big break came in 1991 when she beat out 2000 applicants to become a dancer on the comedy show In Living Color. He career took off in 1997 thanks to playing Tejano music star Selena in the very popular biopic, Selena. Lopez became both an actress and a singer in 1999 when she released her first album, On The 6. From J-Lo's marriage and break-up with Latino singer Marc Anthony to her stint as a judge on American Idol, Lopez has her place in entertainment.

In 1991, became Fly Girl on Fox comedy show In Living Color
In 1993, became back-up dancer for Janet Jackson
In 1997, played Mexican superstar Selena in the film of the same name
In 1999, released her first album On The 6
In 1999, signed endorsement deal with L’Oreal
In 2001, had number one film “The Wedding Planner” and number one album, J.Lo, in same week
In 2001, launched her first fashion line, J.Lo by Jennifer Lopez
In 2002, released her first fragrance, Glow by J.Lo
In 2007, received the Artists for Amnesty International Award
In 2010, became judge on American Idol
In 2012, named most powerful and influential celebrity in the world by Forbes
— Highest paid Latin actress of all-time
— Sold more than 55 million records 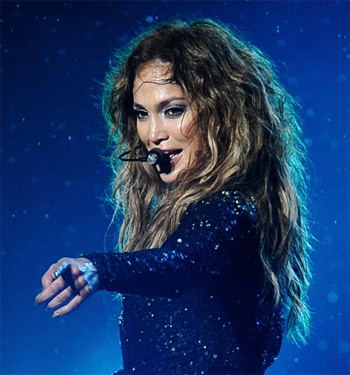