Booking your Jason Mraz tickets here is easy and secure. Either choose the Jason Mraz concert above to purchase them online, or call us at 1-866-837-0608.

You can search the times and dates in the tour schedule above to find the specific Jason Mraz concert you want to attend.

Click on the red 'View Tickets' button to see all the available seats for that Jason Mraz show, along with an interactive seating chart that will help you locate the best seats for your price.

You'll have to choose how many tickets you want to purchase for the Jason Mraz concert tour, and then you'll be brought to our secure checkout.

Shipping/Delivery Information for Jason Mraz Tickets:
You can choose either standard or express delivery and you can specify special delivery instructions if necessary. Your live music concert tickets will be shipped to you using Federal Express.

Also, some tickets to the Jason Mraz tour may be available for immediate download as e-tickets, or electronic tickets, that you can print right from your device.

When a singer/songwriter comes around with a catchy tune and a unique style, fans flock. And that's just what happened to Jason Mraz. The Virginia-raised artist infuses his pop-leaning music with everything from bossa nova and jazz to hip hop and reggae.

Making his debut in 2002 with Waiting for My Rocket to Come, Mraz got a decent bit of attention for the slap-happy melody of his song “The Remedy (I Won't Worry).” The single made it to number 15 on the Billboard Hot 100, helping the album to rack up some respectable sales and Mraz to land some sweet tour slots opening for folks like Tracy Chapman and Alanis Morissette.

All of that worked paid off when his 2005 sophomore effort, Mr. A-Z, entered the Billboard album charts at number four and earned a couple of Grammy nods in the production categories. A slew of touring filled his calendar, finding Mraz on stage with the like of the Rolling Stones, Tristan Prettyman, Bushwalla, and others.

That year Mraz also participated in a fall ad campaign for The Gap that included Prettyman, Morissette, Joss Stone, Keith Urban, and others.

More U.S. and international tour followed in 2006. During his Songs for Friends tour, Mraz caught some solid performances on tape and released them online as Selections for Friends. The collection was culled from shows at Schubas Tavern and Villa Montalvo that he played in July of 2006.

To kick off 2007, Mraz re-wrote a tune of his own -- “Plain Jane” -- to come up with "The Beauty in Ugly" which was featured in ABC's Ugly Betty and as part of the network's "Be Ugly in '07" campaign. Mraz even recorded a Spanish version of the song, "La Nueva Belleza (The New Beauty)."

Another television booster came in the form of American Idol hopeful Chris Richardson performing the Mraz tune, "Geek in the Pink." Downloads of the track went through the roof, especially after a contestant on Canadian Idol did a rendition, as well.

Keeping his momentum going in 2008, Jason's third studio set, We Sing. We Dance. We Steal Things., debuted at number three on the Billboard charts. The lead single, “I'm Yours,” broke the Top 10 in the U.S., Europe, and New Zealand, while also helping the album crack into some high seats on charts around the world.

Three more Grammy nominations ensued for 2009, as did gold-status record sales and an appearance on Saturday Night Live. A live CD/DVD release, Jason Mraz's Beautiful Mess: Live on Earth, helped fill in the gaps until Mraz could get back into the studio.

Mraz finally hit Grammy gold in 2010 with two wins for "Make It Mine" and "Lucky," his successful collaboration with Colbie Caillat. His fourth album and a tour would round out the year. 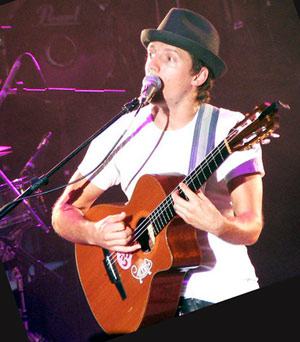