Booking your James Taylor tickets here is easy and secure. Either choose the James Taylor concert above to purchase them online, or call us at 1-866-837-0608.

You can search the times and dates in the tour schedule above to find the specific James Taylor concert you want to attend.

Click on the red 'View Tickets' button to see all the available seats for that James Taylor show, along with an interactive seating chart that will help you locate the best seats for your price.

You'll have to choose how many tickets you want to purchase for the James Taylor concert tour, and then you'll be brought to our secure checkout.

Shipping/Delivery Information for James Taylor Tickets:
You can choose either standard or express delivery and you can specify special delivery instructions if necessary. Your live music concert tickets will be shipped to you using Federal Express.

Also, some tickets to the James Taylor tour may be available for immediate download as e-tickets, or electronic tickets, that you can print right from your device.

Now in his sixth decade of music making, James Taylor is the quintessential singer/songwriter whose voice was the salve that helped heal the wounds of the raucous 1960s.

His sophomore release, Sweet Baby James, not only broke him into the mainstream, it also would become a classic of the genre. Along with the title track, “Country Road” and “Fire and Rain” set the songwriting bar for Taylor and all other artists to follow.

Dropping out of school at 16 and moving to New York, Taylor formed a band with his brother Alex. The move proved too much for JT, and he checked himself into a psychiatric hospital for depression. The experience would inform and inspire some of his early work.

In 1966, after earning his high school diploma, he moved back to New York and formed The Flying Machine with Danny Kortchmar and Joel O'Brien. The group banged around Greenwich Village and released one album through Rainy Day Records before splitting up.

In an attempt to overcome a heroin addiction, Taylor moved to London in 1968 and earned himself a deal with Apple Records who released his eponymous solo debut. Heroine, however, still had a hold on the artist, so he returned to a rehab hospital in Massachusetts.

By July 1969, Taylor was healthy enough to make his stage debut at the Troubadour in Los Angeles. Soon after, a motorcycle accident broke both his hands. That didn't stop him from signing with Warner Bros. Records and issuing Sweet Baby James the following year.

Subsequent recordings would yield such memorable cuts as “Long Ago and Far Away,” "Don't Let Me Be Lonely Tonight," “Shower the People,” “Up on the Roof,” and “You've Got a Friend,” which won him a Grammy.

Despite his marked skill in the craft of songwriting, Taylor also found success covering tunes like Marvin Gaye's "How Sweet It Is (To Be Loved by You)” and Jimmy James' “Handy Man,” which garnered a second Grammy for Taylor.

Beginning in 1980, Taylor got the taste of touring on his tongue and has since made that a steady force in his career. The following year would see the single “Her Town Too” and the album Dad Loves His Work both climb into the Top Ten.

At the turn of the century, Taylor's first greatest hits collection had tallied sales of more than 10 million leading to a follow-up compendium. He had also garnered inductions into both the Rock & Roll Hall of Fame and the Songwriter's Hall of Fame.

The end of the decade found Taylor focusing on cover songs, as he released two CDs worth via Hear Music. 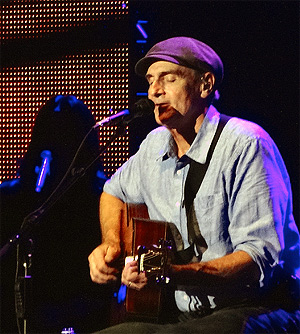