Our Iron Maiden Winnipeg 8/28/19 ticket prices are often cheaper than the rest, our checkout and servers are secure, and all Iron Maiden Bell MTS Place tickets are 100% guaranteed.

Click on the red 'View Tickets' button above to see all the available tickets for that Bell MTS Place concert, along with an interactive seating chart that will help you locate the best seats for your price. After you choose how many Bell MTS Place tickets you want, you'll be brought to our secure checkout to finalize your Iron Maiden Winnipeg concert tickets purchase.

Iron Maiden Ticket Shipping/Delivery Information:
You can choose either standard or express delivery. There may also be electronic Iron Maiden Winnipeg August 28, 2019 tickets (or e-tickets) available for immediate download. Otherwise, tickets are shipped with Federal Express.

Other Upcoming Concerts in Winnipeg, MB

When bassist Steve Harris teemed up with vocalist Paul Di'Anno, guitarist Tony Parsons, and drummer Doug Sampson in 1976, the resulting band would become heavy metal legends Iron Maiden. After gigging around a bit, their eponymous debut dropped in 1980 (including new guitarist Doug Stratton) and became a hit in their UK homeland on the strength of the “Running Free” single.

Their second effort, 1981's Killers, saw yet another new guitarist in Adrian Smith. A year later, Di'Anno would also be out in favor of Bruce Dickinson when it came time to record Number of the Beast which would eventually be ranked as one of the greatest hard rock albums in history.

Riding a wave of massive success, Iron Maiden stuck with the same formula for Piece of Mind, then hit the road prior to making Powerslave in 1983 and touring even more. Culled from recordings of that run was the live double album Live After Death in 1985.

Finally, with 1986's Somewhere in Time and 1988's Seventh Son of a Seventh Son, Iron Maiden mixed it up a bit by incorporating synth guitars and conceptual themes. The latter included singles like "The Evil That Men Do" and "The Clairvoyant" that lifted it up to high acclaim among critics.

Following the supporting tour, Smith took his leave and the band took a break. Winding back up a year later, Iron Maiden featured Janick Gers on guitar for 1990's return-to-form No Prayer for the Dying. Despit... Read more 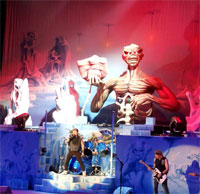