Hozier tickets can be purchased here where you'll discover a gigantic choice of affordable concert tickets.

Booking your Hozier tickets here is easy and secure. Either choose the Hozier concert above to purchase them online, or call us at 1-866-837-0608.

You can search the times and dates in the tour schedule above to find the specific Hozier concert you want to attend.

Click on the red 'View Tickets' button to see all the available seats for that Hozier show, along with an interactive seating chart that will help you locate the best seats for your price.

You'll have to choose how many tickets you want to purchase for the Hozier concert tour, and then you'll be brought to our secure checkout.

Hozier ticket prices may be above or below face value and can fluctuate. You'll find cheap Hozier tickets here at relatively affordable prices.

Shipping/Delivery Information for Hozier Tickets:
You can choose either standard or express delivery and you can specify special delivery instructions if necessary. Your live music concert tickets will be shipped to you using Federal Express.

Also, some tickets to the Hozier tour may be available for immediate download as e-tickets, or electronic tickets, that you can print right from your device.

All you need is a song.

With the right tune you can go from nobody to international singing star overnight. If you don’t believe that to be true just ask Hozier.

"I always thought of myself as a very, very obscure artist. I never thought Irish radio would be turned on by my music — or any f**king radio station, excuse my French." — Hozier

Andrew Hozier-Byrne, who goes by the moniker “Hozier,” is an award winning singer-songwriter from Ireland. He went from obscurity to being in everyone’s iTunes thanks to “Take Me to Church.” A song he wrote and recorded in his parent’s attic.

“Take Me to Church” dropped Sept. 13, 2013 and the following year it went to the top of charts in more than a dozen countries.

It did not summit the main singles chart in the United States. On the Billboard Hot 100, the song stalled at number two.

“Take Me to Church” was nominated for a Grammy Award for Song of the Year but lost to Sam Smith’s “Stay with Me.”

“Take Me to Church” is a masterful combination of rock, soul, blues, and gospel. When it was released there was nothing like it in popular music or Top 40 radio.

Lyrically, the song derides the Catholic Church over its views of homosexuality. This has prompted some to think Hozier is gay. He is not.

Hozier-Byrne was born on March 17, 1990—yes, he was born on St. Patrick’s Day. His father was a drummer in a blues band and introduced his son to the genre. Growing up, instead of listening to popular music, Hozier-Byrne “developed a fascination with the roots of African-American music.”

Hozier taught himself to play guitar and piano.

For a while, he study music at Trinity College but dropped out to try and make it big in the music business.

Hozier’s self-titled debut dropped Sept. 14, 2014. The album has since been certified Gold in the United States.

Besides being a successful recording artist, Hozier is also an amazing live performer. Hozier tickets are always in high demand and have been collected at venues all over the world. 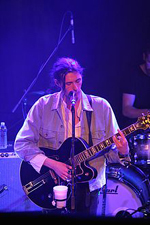