Halsey tickets can be purchased here where you'll discover a gigantic choice of affordable concert tickets.

Booking your Halsey tickets here is easy and secure. Either choose the Halsey concert above to purchase them online, or call us at 1-866-837-0608.

You can search the times and dates in the tour schedule above to find the specific Halsey concert you want to attend.

Click on the red 'View Tickets' button to see all the available seats for that Halsey show, along with an interactive seating chart that will help you locate the best seats for your price.

You'll have to choose how many tickets you want to purchase for the Halsey concert tour, and then you'll be brought to our secure checkout.

Halsey ticket prices may be above or below face value and can fluctuate. You'll find cheap concert tickets here at relatively affordable prices.

Shipping/Delivery Information for Halsey Tickets:
You can choose either standard or express delivery and you can specify special delivery instructions if necessary. Your live music concert tickets will be shipped to you using Federal Express.

Also, some tickets to the Halsey tour may be available for immediate download as e-tickets, or electronic tickets, that you can print right from your device.

At a Halsey concert you should expect the singer to finish with “New Americana,” to do her famous back contortion, to change outfits, and to conduct the audience in an a cappella sing-a-long. There’s something else you should know if you have Halsey tickets. That something is you need to behave.

During a concert at the House of Blues, Halsey scolded her audience after an attendee passed out from the push of the crowd. She chided the audience for not acting like adults and threatened to cancel the entire Halsey tour if they didn’t behave. The singer then warned that she wasn’t “f***ing around.”

A few songs later, Halsey apologized. She said she just wants everyone to enjoy the show and to do so in a safe and secure environment. It’s hard to believe that such a diminutive singer as Halsey can also be so tough. So when you see her live, have lots of fun and make sure you behave.

Halsey is a singer-song writer who began her career in 2012 by posting videos on YouTube and uploading songs to SoundCloud. This eventually led to her signing a recording contract.

Buoyed by the single “New Americana,” Badlands went all the way to #2 on the Billboard 200. It peaked inside the top ten in half a dozen other countries.

Pundits, and even the artist herself, describe her music as electropop. Similar sounding artists include The 1975, Twenty One Pilots, Melanie Martinez, and Zella Day.

Halsey launched her first headlining outing, “Badlands Tour,” in 2015. Before that she opened for Imagine Dragons and The Weeknd.

Where Is Halsey From?

Halsey was born Sept. 29, 1994 in Washington, New Jersey. Her given name is Ashley Nicolette Frangipane. Her mother is of European descent while her father is African American.

Before turning 18, Halsey was diagnosed with bipolar disorder. She later referred to herself as “tri-bi.” The term is meant to indicate that she’s biracial, bipolar, and bisexual.

Ashley took “Halsey” as her nom de plume because it’s an anagram of Ashley and the name of a street where she spent a lot of time growing up. 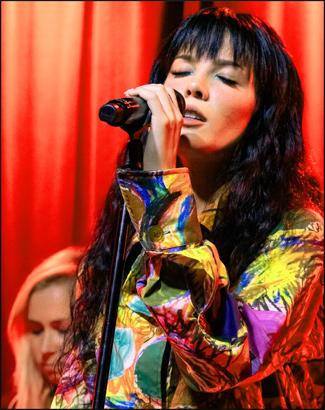