Booking your Guns N' Roses tickets here is easy and secure. Either choose the Guns N' Roses concert above to purchase them online, or call us at 1-866-837-0608.

You can search the times and dates in the tour schedule above to find the specific Guns N' Roses concert you want to attend.

Click on the red 'View Tickets' button to see all the available seats for that Guns N' Roses show, along with an interactive seating chart that will help you locate the best seats for your price.

You'll have to choose how many tickets you want to purchase for the Guns N' Roses concert tour, and then you'll be brought to our secure checkout.

Shipping/Delivery Information for Guns N' Roses Tickets:
You can choose either standard or express delivery and you can specify special delivery instructions if necessary. Your live music concert tickets will be shipped to you using Federal Express.

Also, some tickets to the Guns N' Roses tour may be available for immediate download as e-tickets, or electronic tickets, that you can print right from your device.

A 1986 EP was the first step on the path that would be laid for Guns N' Roses. It was good enough to get them a deal with Geffen Records which led to their debut, Appetite for Destruction.

At the time, most other bands fell somewhere along the pop spectrum between dance and metal. Not GNR. They rocked, hard and dirty.

The grooves were driven by Duff McKagan on bass and Steven Adler on drums. Raw, gitty, sleazy, dark, ugly, honest, refreshing... all these descriptives have been applied with equal vim and vigor and to equal effect.

Their bad boy ways and potent live shows helped build a following slowly, but surely. It took nearly a year for Appetite to catch fire. Eventually, MTV got behind the video for “Sweet Child O' Mine” and everything changed. 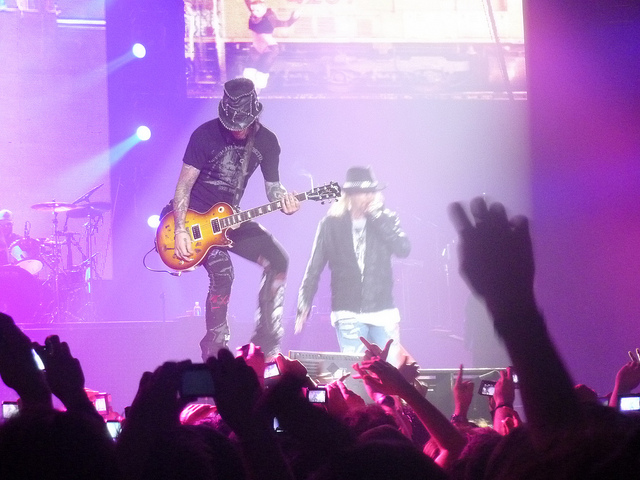 The single and album both topped the charts and GNR was suddenly on the map in a big way. The first cut, “Welcome to the Jungle,” got a second chance followed by “Paradise City,” both of which cracked the Top 10.

To put a fresh spin on things, the band threw down four new acoustic tunes, packaged them up with the initial EP, and issued GNR Lies. “Patience” made it into the Top Five, but another track, “One in a Million,” became famous for less positive reasons due to its hate-filled lyrical themes.

As they headed back into the studio, the band replaced a drug-addled Adler with Matt Sorum (from the Cult) and recruited keyboardist Dizzy Reed to the ranks. 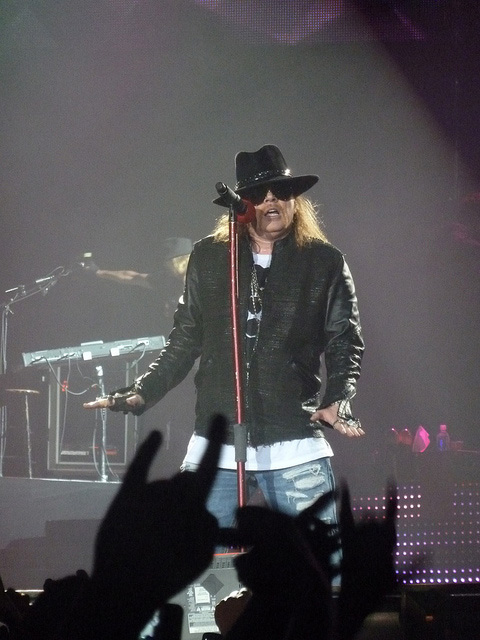 Though, musically, the works were a little bit all over the place, they were nevertheless artful and successful.

Then, in 1992, Nirvana seemed to make Guns N' Roses irrelevant. Rose didn't take the global paradigm shift well and set off on series of tantrums – some of which were very public, one of which incited a riot in Montreal. Izzy took his cue to leave, replaced by Gilby Clarke.

With the new line-up, GNR issued The Spaghetti Incident? in 1993. The set of punk covers failed to generate much enthusiasm, despite positive reviews.

Internal differences over artistic direction forced the band into a holding pattern. Slash took the time to work on a side project; Axl went into hiding.

During his reclusive period, Rose hosted jam sessions with guys like Tommy Stinson, Dave Navarro, and Robin Finck. Both Clarke and Stradlin were left out in the cold, leading to further tensions in the ranks. 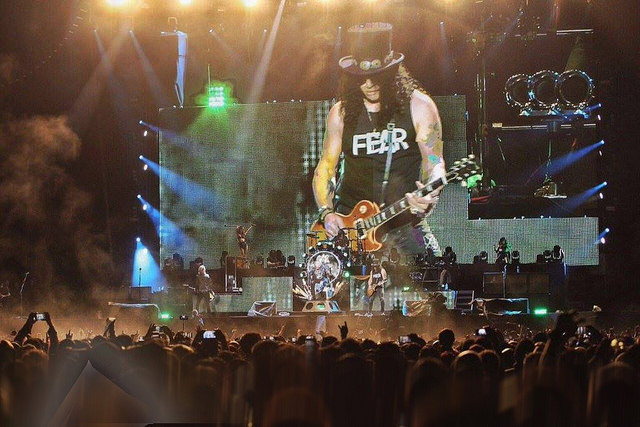 When Axl released his reworking of "Sympathy for the Devil" under the GNR banner, everything went to hell.

Slash was gone by '96. That left Rose as the last man standing from the original roster. Surrounded by new play mates, Axl recorded "Oh My God" for the End of Days film. That was followed up by the double-disc Live Era: '97-'93.

At the turn of the millennium, Finck was officially on board along with Buckethead and Rose's childhood friend Paul Huge as guitarists, Stinson was on bass, Reed was still on keys, and Brian Mantia took the drum throne. Together, they played the band's first live shows in some seven years.

Although they performed at the MTV Video Music Awards in 2002, Axl wasn't in top form and there were no obvious plans for a new record. Still, they hit the road. Europe and Asia went smoothly. But, Rose was a no-show in Vancouver for the first date on the North American leg. A riot ensued.

Meanwhile, Slash, Sorum, and McKagan had teamed up with Scott Weiland from Stone Temple Pilots on the new Velvet Revolver project. 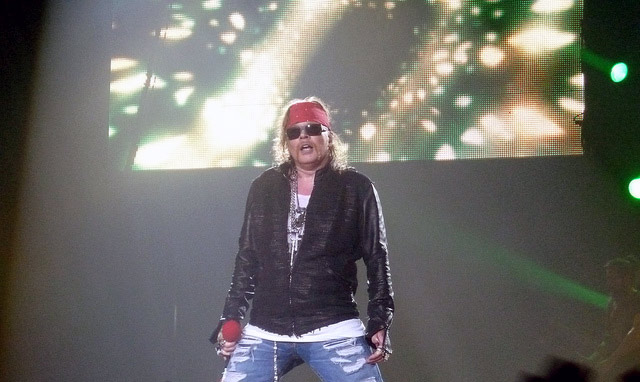 Year after year went by without a new record from Guns N' Roses, despite rampant rumors and occasional track leaks. In 2005, word was that Axl had tallied a production bill of more than $13 million on the as-yet-to-be-heard album. A bevy of producers, arrangers, and guitarists had all been involved.

The following year, Rose was spotted here and there, then did a bit of touring. It wasn't until 2008, though, that Chinese Democracy finally dropped. Though it debuted at number three on the Billboard album charts and earned favorable reviews, the set didn't do nearly as well as many had hoped.

The subsequent world tour was plagued by punctuality problems which often resulted in fans throwing things at the singer. 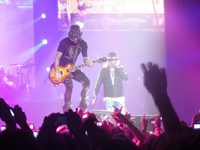