Booking your Green Day tickets here is easy and secure. Either choose the Green Day concert above to purchase them online, or call us at 1-866-837-0608.

You can search the times and dates in the tour schedule above to find the specific Green Day concert you want to attend.

Click on the red 'View Tickets' button to see all the available seats for that Green Day show, along with an interactive seating chart that will help you locate the best seats for your price.

You'll have to choose how many tickets you want to purchase for the Green Day concert tour, and then you'll be brought to our secure checkout.

Green Day ticket prices may be above or below face value and can fluctuate. You'll find cheap Green Day tickets here at relatively affordable prices.

Shipping/Delivery Information for Green Day Tickets:
You can choose either standard or express delivery and you can specify special delivery instructions if necessary. Your live music concert tickets will be shipped to you using Federal Express.

Also, some tickets to the Green Day tour may be available for immediate download as e-tickets, or electronic tickets, that you can print right from your device.


After Green Day’s sophomore album, Kerplunk, sold 50,000 units—a big deal if you were an American independent punk rock band in 1992—the California trio left their small label, Lookout!, and signed with the much bigger Reprise Record.

Many fans derided Green Day as sellouts for switching labels. However, the move proved to be quite prosperous as the band’s first major release, Dookie, went on to sell over 15 million copies and earned the band the 1995 Grammy for Best Alternative Music Album.

Green Day started in 1987 when two 15-year olds, guitarist and singer Billie Joe Armstrong and bassist Mike Dirnt, formed a band called Sweet Children. It didn’t take long for the band to garner a local following and attract the attention of an independent record label.

After their signing, the band changed their name to Green Day to avoid confusion with another area band called “Sweet Baby.” According to legend, “Green Day” was chosen due to the band’s affinity for marijuana.

In 1990, before embarking on their first national tour, Green Day’s drummer quit the band to go to college. He was replaced by Tre Cool. When it became apparent that the old drummer wasn’t returning, Cool was given the job permanently.

After Dookie, Green Day released three more albums, Insomniac (1995), Nimrod (1997) and Warning (2000). While receiving positive reviews and numerous awards, none of the albums sold as well as the band’s seminal release, Dookie.

In the summer of 2003, master tapes of 20 of their new songs were stolen from their studio. After regrouping from the loss, both artistically and personally, Green Day would return enter the studio and record “American Idiot.” Released in 2004, the punk rock opera not only debuted at number one, a first for the band, but reintroduced Green Day to an entirely new generation of fans.

In 2009, after spending a couple of years working on small side projects, Green Day launched a world tour to support the released of their eighth studio album, 21st Century Breakdown.

Green Day has been involved in a couple of violent incidents during their long career, both occurring during shows in 1994. The first melee occurred in Boston and ended with 100 people injured and 45 arrested. The second occurred at Woodstock ’94. After the band instigated the world’s largest mud fight, a security guard mistook Dirnt for a zealous fan and punched him in the mouth, knocking out some of his teeth.

Perhaps Green Day’s biggest honor was being part of The Simpsons Movie. The band made a cameo and performed the show’s theme song. 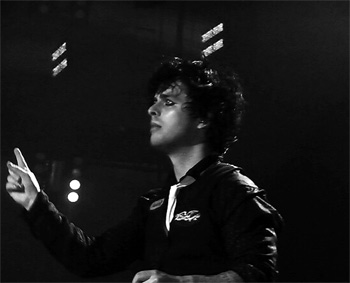