Booking your George Strait tickets here is easy and secure. Either choose the George Strait concert above to purchase them online, or call us at 1-866-837-0608.

You can search the times and dates in the tour schedule above to find the specific George Strait concert you want to attend.

Click on the red 'View Tickets' button to see all the available seats for that George Strait show, along with an interactive seating chart that will help you locate the best seats for your price.

You'll have to choose how many tickets you want to purchase for the George Strait concert tour, and then you'll be brought to our secure checkout.

Shipping/Delivery Information for George Strait Tickets:
You can choose either standard or express delivery and you can specify special delivery instructions if necessary. Your live music concert tickets will be shipped to you using Federal Express.

Also, some tickets to the George Strait tour may be available for immediate download as e-tickets, or electronic tickets, that you can print right from your device.

George Strait is known as the "King of Country." That epitaph is not a marketing ploy.

Strait is one of the best selling recording artists of any genre in the United States. His 38 hit albums (records certified by RIAA as either gold or platinum) are third behind Elvis Presley and The Beatles. He's charted a record 57-number one hits and holds the mark for most number one albums in the history of country of music.

Strait holds the record for most nominations and most wins for both CMA (Country Music Association) and ACM (Academy of Country Music) awards.

In 2006, Strait was elected to the Country Music Hall of Fame. Two years later he was named Artist of The Decade (for the 2000s) by the ACM.

This dedication to a traditional country western sound is quite obvious considering Strait is an actual cowboy.

Strait grew up on his father's 2,000-acre cattle ranch located outside of Big Wells, Texas. He graduated from a college in San Marcos with a degree in agriculture.

Before hitting it big, Strait worked at his father's ranch during the day and played music at night.

Currently, Strait is a member of the Professional Rodeo Cowboys Association, along with his son Bubba. Strait also hosts and lends his name to an annual team roping event.

Strait started his musical journey in a rock and roll garage band. However, he switched to country after hearing artists like Merle Haggard, George Jones, and Hank Williams.

After being honorably discharged from the army in 1975, Strait returned home and joined a country band called "Stoney Ridge." Strait quickly became their front man and changed the band's name to "Ace In The Hole." The band eventually became a regional success.

In 1980, a friend of Strait's, with musical connections, convinced a record label to come to Texas to hear him play. The executives liked what they heard and signed Strait to a solo contract. "Ace In The Hole" remained as Strait's backup band.

Strait's first single, "Unwound," and his first album, "Strait Country," were both released in 1981. In total, Strait has released 26 studio albums and 89 singles.

In 1992, Strait released Pure Country, the soundtrack to the film of the same name. Pure Country would become Strait's most successful studio album of his career. He also played the lead role in the film starring opposite of Leslie Ann Warren.

Strait's 2007 offering, Troubadour, earned him his first ever Grammy award. 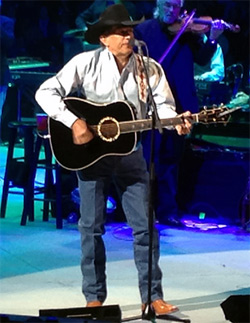