Foreigner tickets can be purchased here where you'll discover a huge choice of affordable concert tickets.

Booking your Foreigner tickets here is easy and secure. Either choose the Foreigner concert above to purchase them online, or call us at 1-866-837-0608.

You can search the times and dates in the tour schedule above to find the specific Foreigner concert you want to attend.

Click on the red 'View Tickets' button to see all the available seats for that Foreigner show, along with an interactive seating chart that will help you locate the best seats for your price.

You'll have to choose how many tickets you want to purchase for the Foreigner concert tour, and then you'll be brought to our secure checkout.

Foreigner ticket prices may be above or below face value and can fluctuate. You'll find cheap Foreigner tickets here at relatively affordable prices.

Shipping/Delivery Information for Foreigner Tickets:
You can choose either standard or express delivery and you can specify special delivery instructions if necessary. Your live music concert tickets will be shipped to you using Federal Express.

Also, some tickets to the Foreigner tour may be available for immediate download as e-tickets, or electronic tickets, that you can print right from your device.

Foreigner was formed in 1976 by Mick Jones, Ian McDonald, and Lou Gramm. Jones and McDonald are British and Gramm is English. Their different nationalities inspired the name “Foreigner.” The band’s lineup has changed many times over the years with the only constant member being Jones. There is an exception though; on May 22, 2010 Jones missed a Foreigner concert in Las Vegas. He was replaced that night by Whitesnake guitarist Doug Aldrich.

Gramm left the band in 1990 to pursue a solo a career. In April of 1992, Gramm met with Jones in Los Angeles to discuss his return. Their meeting corresponded with the L.A. Riots and the two musicians were forced to stay in a hotel while armed guards patrolled the grounds. Gramm had to fly into John Wayne Airport because rioters were shooting at planes landing at LAX. Despite the turmoil going on around them, the couple agreed that Gramm should return to the band. He remained with Foreigner until early 2003. This time Gramm departed the group citing a lack of communication between himself and Jones.

Through the years, Foreigner tickets have been sold to venues all over the world. The band has also played with a number of well-known acts including Phil Collins, Jason Bonham, Styx, Kansas, and Crosby, Stills and Nash. Electronic keyboard pioneer Thomas Dolby played synthesizers on the band’s seminal album, 4. His playing is especially prevalent on the tracka “Urgent” and “Waiting For A Girl Like You.” 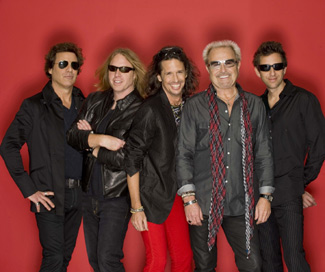