Booking your Eric Clapton tickets here is easy and secure. Either choose the Eric Clapton concert above to purchase them online, or call us at 1-866-837-0608.

You can search the times and dates in the tour schedule above to find the specific Eric Clapton concert you want to attend.

Click on the red 'View Tickets' button to see all the available seats for that Eric Clapton show, along with an interactive seating chart that will help you locate the best seats for your price.

You'll have to choose how many tickets you want to purchase for the Eric Clapton concert tour, and then you'll be brought to our secure checkout.

Shipping/Delivery Information for Eric Clapton Tickets:
You can choose either standard or express delivery and you can specify special delivery instructions if necessary. Your live music concert tickets will be shipped to you using Federal Express.

Also, some tickets to the Eric Clapton tour may be available for immediate download as e-tickets, or electronic tickets, that you can print right from your device.

"Clapton is God." Three of rock's most infamous words weren't sung but written, as in spray painted on a wall in an Islington's Underground Station in late 1967. The graffiti was immortalized in a photograph that also contains a dog urinating on the wall and it quickly evolved into a slogan for Eric Clapton fans all over the world.

According to Rolling Stone magazine, Clapton isn't the greatest guitar player of all-time, he's fourth. That's Clapton's position on the publication's list of the "100 Greatest Guitarists of All Time." Clapton career is prodigious, fecund, and highly profitable.

As the world's only three-time inductee into the Rock and Roll Hall of Fame, Clapton's repertoire of music spans more than five decades. His hits range from the power rock of Cream's "Sunshine of Your Love" (1968), to Bob Marley's reggae anthem "I Shot the Sherriff" (1974), to the housewife friendly, "Change the World" (1996).

Clapton was born March 30, 1945 in Ripley, Surrey, England. Due to his mother's young age (she was only 16 when Eric was born) Clapton grew up believing his mother was his sister and his grandparents were his parents.

Clapton received his first guitar a present on his 13th birthday. Clapton found learning the guitar so difficult that he almost gave it up. Fortunately he didn't and by the end of 1965 he was widely regarded as the best blues guitarist on the British Isles.

Clapton was close friends with George Harrison. In fact, the two collaborated on Harrison's first solo album, "Wonderwall Music," and Clapton appeared on "While My Guitar Gently Weeps" from The Beatles' White Album (1968). Due to his friendship with Harrison, Clapton also got to know his wife, Pattue Boyd.

Clapton soon became deeply infatuated with Boyd but she resisted his advances. The forlorn Clapton used his unrequited love as inspiration for the Derek and the Dominos' album "Layla and Other Assorted Love Songs."

One song in particular, named after a poem from Persian literature, was particularly about his love for Boyd. That song was called "Layla' and it's now considered one of greatest songs in rock and roll history. 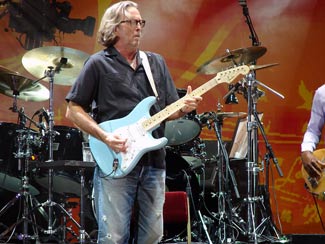