Booking your Elvis Costello tickets here is easy and secure. Either choose the Elvis Costello concert above to purchase them online, or call us at 1-866-837-0608.

You can search the times and dates in the tour schedule above to find the specific Elvis Costello concert you want to attend.

Click on the red 'View Tickets' button to see all the available seats for that Elvis Costello show, along with an interactive seating chart that will help you locate the best seats for your price.

You'll have to choose how many tickets you want to purchase for the Elvis Costello concert tour, and then you'll be brought to our secure checkout.

Shipping/Delivery Information for Elvis Costello Tickets:
You can choose either standard or express delivery and you can specify special delivery instructions if necessary. Your live music concert tickets will be shipped to you using Federal Express.

Also, some tickets to the Elvis Costello tour may be available for immediate download as e-tickets, or electronic tickets, that you can print right from your device.

Elvis Costello, originally known as Declan MacManus, got his start in the London pub scene of the '70s before staking a solid place in the New Wave movement. It was in the mid-'70s that he began performing under the D.P. Costello moniker as a tribute to his father who'd used Day Costello as his stage name. (Costello was his paternal grandmother's maiden name.)

His father sang with the Joe Loss Orchestra, so music was in young Declan's blood from an early age. Their first gig together was singing a lemonade commercial jingle that won a silver award at the 1974 International Advertising Festival.

Costello's early bands weren't successful enough to keep him from needing a day job, most notably at Elizabeth Arden which he deemed “the vanity factory” in his song “I'm Not Angry.” Embarking on a solo endeavor, Costello's demo tape gained favor with the folks at Stiff Records and secured him a contract. His manager at the time suggested adding a nod to Elvis Presley into his pseudonym.

With his debut in 1977 with “Less Than Zero” from My Aim Is True, Costello enjoyed some moderate success. Stiff only had distribution in the UK, so Costello sought to remedy his international problem by busking outside a convention of CBS Records' executives in London. He was arrested, but got signed to their Columbia imprint a few months later.

Establishing his backing band as The Attractions with Pete Thomas, Steve Nieve, and Bruce Thomas, Costello had his first big breakthrough with “Watching the Detectives.” His 1978 follow up, This Year's Model, was a high priority for Columbia, and his 1979 release, Armed Forces, climbed all the way to number two on the UK charts.

His outlook in the U.S. wasn't as cheery due to a 1977 incident on Saturday Night Live where he changed up his performance mid-song and a 1979 drunken argument wherein he referred to James Brown and Ray Charles in an offensive manner. Costello apologized in a press conference and in the liner notes of 1980's Get Happy!!

After 1981's Trust failed to move things forward, Costello veered into his long-loved country music with Almost Blue. In the UK, a sticker on the album read, "WARNING: This album contains country & western music and may cause a radical reaction in narrow minded listeners."

Subsequent releases such as Imperial Bedroom and Punch the Clock found Costello exploring and incorporating other styles, including darker vibes and horns. The latter record featured his first international hit, “Everyday I Write the Book.”

After announcing his retirement and the disbanding of The Attractions, the gang produced 1984's Goodbye Cruel World, but "got it as wrong as you can in terms of the execution," in Costelo's mind. The retirement didn't take and Costello appeared at Live Aid the following year.

Costello (using the alias Napoleon Dynamite) and The Attractions came together again for 1986's Blood and Chocolate. Their return to form was lauded by critics, but failed to spur any real commercial success.

Signing to a new label and collaborating with Paul McCartney would fix that, though, as “Veronica” off of 1989's Spike would become his biggest hit to date in America. His collaborations didn't end there and led to his acclaimed teaming with the Brodsky Quartet in 1993.

Costello squeezed a few more releases out of The Attractions, including Brutal Youth and All This Useless Beauty, before the band finally fell completely apart in 1996.

Another label hop gave Costello the creative freedom to experiment creatively, and so he did. Partnering with Burt Bacharach, No Doubt, Paddy Moloney, and opera singer Anne Sofie von Otter with much success. He even made appearances on episodes of The Simpsons and Frasier.

In 2002, with newly reformulated backing band The Imposters (bassist Davey Faragher replacing Bruce Thomas), Costello released When I Was Cruel. The following year, Costello, along with The Attractions, were inducted into the Rock & Roll Hall of Fame. He also announced his engagement to jazz musician Diana Krall.

Throughout the 2000s, Costello continued his adventures into writing music for jazz artists and ballets, collaborating with Krall, Marian McPartland, Allen Toussaint, the Metropole Orkest, Italian dance troupe Aterballeto, and the Danish Royal Opera. His personal works during that decade included The Delivery Man and Momofuku, the former earning praise as one of his best efforts. 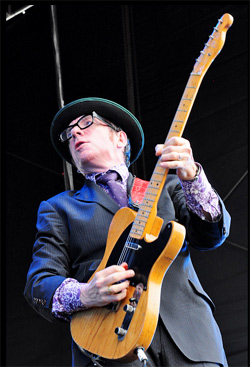