Booking your Elton John tickets here is easy and secure. Either choose the Elton John concert above to purchase them online, or call us at 1-866-837-0608.

You can search the times and dates in the tour schedule above to find the specific Elton John concert you want to attend.

Click on the red 'View Tickets' button to see all the available seats for that Elton John show, along with an interactive seating chart that will help you locate the best seats for your price.

You'll have to choose how many tickets you want to purchase for the Elton John concert tour, and then you'll be brought to our secure checkout.

Shipping/Delivery Information for Elton John Tickets:
You can choose either standard or express delivery and you can specify special delivery instructions if necessary. Your live music concert tickets will be shipped to you using Federal Express.

Also, some tickets to the Elton John tour may be available for immediate download as e-tickets, or electronic tickets, that you can print right from your device.

Recruiting Paul Buckmaster as musical arranger for the next outing, the eponymously titled Elton John which spawned the team's first Top 100 single in the U.S. -- “Border Song.” The follow-up single, “Your Song,” made the Top 10 with the album following suit in short order.

More hit records followed in quick succession -- Don't Shoot Me I'm Only the Piano Player, Goodbye Yellow Brick Road, and Caribou – each of which held popular hits within their confines. “Rocket Man,” “Crocodile Rock,” “Daniel,” “Bennie and the Jets,” and “Don't Let the Sun Go Down on Me” would go on to become classics.

His '80s albums began to build some momentum back, though they would not match the wild success John enjoyed in the '70s. In 1990, he checked himself into rehab for alcoholism, drug addiction, and bulimia.

A couple of years later, he established the Elton John AIDS Foundation and pledged that he would donate all future royalties from singles sales to research. His The One, released in 1992, hit number eight on the charts, his best effort since 1976.

In 1994, John was inducted into the Rock and Roll Hall of Fame. The same year, he ventured into animated films, writing songs for The Lion King along with Tim Rice. "Can You Feel the Love Tonight" won Elton both a Grammy and an Oscar with the soundtrack going on to sell more than 15 million units.

In March of 2007, he also played his record-breaking 60th show at Madison Square Garden to celebrate his 60th birthday. In 2009, John and Billy Joel set out on their Face to Face Tour.

And every Elton John fan ought to consider seeing Elton on his 2018-2019 'Farewell Yellow Brick Road' tour, because it will be his last tour. 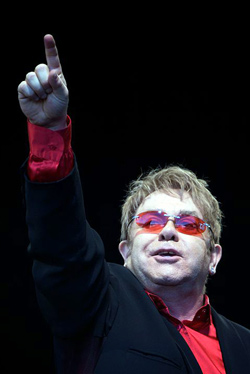