Disturbed tickets can be purchased here where you'll discover a huge choice of affordable concert tickets.

Booking your Disturbed tickets here is easy and secure. Either choose the Disturbed concert above to purchase them online, or call us at 1-866-837-0608.

You can search the times and dates in the tour schedule above to find the specific Disturbed concert you want to attend.

Click on the red 'View Tickets' button to see all the available seats for that Disturbed show, along with an interactive seating chart that will help you locate the best seats for your price.

You'll have to choose how many tickets you want to purchase for the Disturbed concert tour, and then you'll be brought to our secure checkout.

Disturbed ticket prices may be above or below face value and can fluctuate. You'll find cheap Disturbed tickets here at relatively affordable prices.

Shipping/Delivery Information for Disturbed Tickets:
You can choose either standard or express delivery and you can specify special delivery instructions if necessary. Your live music concert tickets will be shipped to you using Federal Express.

Also, some tickets to the Disturbed tour may be available for immediate download as e-tickets, or electronic tickets, that you can print right from your device.

As Brawl, guitarist Dan Donegan, bassist Steve “Fuzz” Kmak, and drummer Mike Wengren had been gigging around Chicago with another singer for a while prior to their meeting vocalist David Draiman in 1997. Having been expelled from five different boarding schools, the rebellious Draiman found a good fit in the thrashabout heavy metal sound that was Disturbed.

The new foursome kept playing around Chicago and, eventually, landed a deal with Giant Records on the strength of their demo tape and local fan base.

March of 2000 saw the release of Disturbed's debut, The Sickness. An appearance on Ozzfest's main stage and on Marilyn Manson's tour the following year helped the guys find a much wider audience. It helped so much, Disturbed followed up with a fall headlining tour of their own while the album climbed to number 29 on the Billboard album chart.

Off the road, Disturbed recorded their take on professional wrestler Steve Austin's theme song. The track found its way out of the ring and on to the radio. The rockers were also included among the artists tapped for a Faith No More tribute project. However, their contribution of “Midlife Crisis” failed to make the final cut. A documentary of the band, M.O.L., also came in the summer of 2002.

Their next stint in the studio found them working with producer Johnny K and mix engineer Andy Wallace. The goal was to capture a sound that was reminiscent of heavy metal heroes like Iron Maiden, Judas Priest, and Pantera.

The result was Believe which dropped in late 2002 eventually made its way to the top of Billboard's Hot 200 album chart. After the Music as a Weapon II tour and another round of Ozzfest, Fuzz was fired and replaced by John Moyer of Union Underground.

The Music as a Weapon II album documented the tour and was released in 2004. A new studio set came the next year in Ten Thousand Fists with another run of Music as a Weapon III touring in 2006. Indestructible following in 2008 with various tracks making it into films (Transformers) and video games (Rock Band). "Inside the Fire" from Indestructible earned a nomination for a 2009 Grammy Award for Best Hard Rock Performance.

In July 2011, Disturbed began an open-ended hiatus with internal band conflicts cited as the cause. Giving fans an early Christmas present, Disturbed released a collection of rare recordings, The Lost Children, in November of 2011. 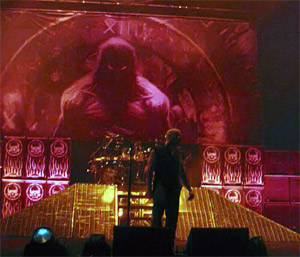