Booking your Def Leppard tickets here is easy and secure. Either choose the Def Leppard concert above to purchase them online, or call us at 1-866-837-0608.

You can search the times and dates in the tour schedule above to find the specific Def Leppard concert you want to attend.

Click on the red 'View Tickets' button to see all the available seats for that Def Leppard show, along with an interactive seating chart that will help you locate the best seats for your price.

You'll have to choose how many tickets you want to purchase for the Def Leppard concert tour, and then you'll be brought to our secure checkout.

Shipping/Delivery Information for Def Leppard Tickets:
You can choose either standard or express delivery and you can specify special delivery instructions if necessary. Your live music concert tickets will be shipped to you using Federal Express.

Also, some tickets to the Def Leppard tour may be available for immediate download as e-tickets, or electronic tickets, that you can print right from your device.

Def Leppard’s third studio album, Pyromania, came out in 1983 and sold more than 10 million copies. The album produced two top twenty hits, “Photograph,” and “Rock of Ages,” and established the British hard rock band as one of the world’s top music acts.

Surprisingly, Pyromania never reached the top spot on the Billboard 200. It was kept at the number two spot by Michael Jackson’s Thriller.

Def Leppard was formed in Sheffield, England in 1977. When they were first formed, they were called Atomic Mass but changed to “Def Leppard” after a suggestion by frontman Joe Elliott. He came up with the name while passing away the time in English class.

The only two original members left in the band are the aforementioned Elliott and bassist Rick Savage. Drummer Rick Allen joined the band in 1978. Phil Collen took over the lead guitar duties in 1982, during the recording of Pyromania, and guitarist Vivian Campbell came onboard in 1992.

Def Leppard released their first album, On Through the Night, in 1980. It did fairly well in the UK but English heavy metal fans derided the band for pandering to American audiences. At one early Def Leppard concert, irate attendees threw beer cans at the band to show their dissatisfaction.

The band’s second album, High ‘n’ Dry, was produced by Robert John “Mutt” Lange. The album didn’t sell very well but the video to one of its singles, “Bringin’ On the Heartbreak,” received tremendous airplay on MTV. The video, as well as Lange’s production, helped paved the way for the success of Pyromania.

The band’s follow-up to Pyromania, Hysteria, took three years to record and was released in the summer of 1987. Album sales were sluggish until the release of “Pour Some Sugar on Me”—now considered the band’s signature song.

The album went on to chart six more singles, including the band’s only number one hit, “Love Bites,” and sell more than 20 million copies. On the strength of Hysteria, a massive, 15-month Def Leppard tour was launched in which the band performed in the round.

Tragedy hit Def Leppard in December of 1984 when Allen lost his left arm in a nasty car crash. Despite the loss of his appendage, Allen underwent a long and strenuous rehabilitation so he could return to playing music. In 1986, with a custom drum kit, Allen triumphantly rejoined the band.

On the night of his return, those with Def Leppard tickets welcomed Allen back with a heart-warming ovation.

The band would not record another album in the 1980s but in the ensuing decades they would release a number of successful and highly acclaimed works.

Def Leppard also continued to tour during this time, performing their energetic and amazing live shows all over the world. 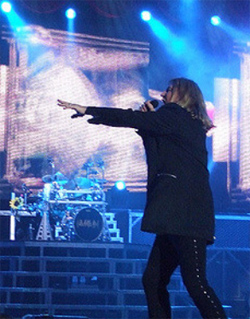