Coheed and Cambria tickets can be purchased here where you'll discover a gigantic choice of affordable concert tickets.

How to Buy Coheed and Cambria Tour Tickets Here

You can search the times and dates in the tour schedule above to find the specific Coheed and Cambria concert you want to attend.

Click on the red 'View Tickets' button to see all the available seats for that Coheed and Cambria show, along with an interactive seating chart that will help you locate the best seats for your price.

You'll have to choose how many tickets you want to purchase for the Coheed and Cambria concert tour, and then you'll be brought to our secure checkout.

Shipping/Delivery Information for Coheed and Cambria Tickets:
You can choose either standard or express delivery and you can specify special delivery instructions if necessary. Your live music concert tickets will be shipped to you using Federal Express.

Also, some tickets to the Coheed and Cambria tour may be available for immediate download as e-tickets, or electronic tickets, that you can print right from your device.

About Coheed and Cambria

Coheed and Cambria are one of those amazing bands that sound just as good in concert as they do on their records. The progressive rock outfit from New York State tours frequently. They’re known for their amazing musicianship and their mind blowing multimedia shows. So when they come to your part of the world get your Coheed and Cambria tickets right here at Clickitticket.

Is it true that all Coheed and Cambria albums are concept albums? It was true, but in 2015 the band released their first non-concept album, The Color Before The Sun. In that opus, the band veered away from progressive rock and science fiction themes towards a more straight forward alternative aesthetic.

Hitherto The Color Before The Sun, all Coheed and Cambria albums were about the events and characters found in Sanchez’s science fiction comic book, The Armory Wars.

Some of the bands most popular albums include Good Apollo, I'm Burning Star IV, Volume Two: No World for Tomorrow (2007), Year of the Black Rainbow (2010), and The Afterman: Ascension (2012).

Coheed and Cambria sound like a harder version of Rush or Tenacious D if they took themselves seriously. The band’s music is often categorized as “progressive rock” or “new prog.”

Lyrically, the band draws inspiration from the Armory Wars. Despite this fact, not every one of their songs sounds like a title of a Star Trek episode or the name of a Star Wars character. The bands has released several singles with quintessential rock titles, singles like “Welcome Home,” “Blood Red Summer,” and “The Running Free.”

Where’s The Best Place to Buy Coheed and Cambria Tickets?

The best place to buy Coheed and Cambria tickets is right here at Clickitticket. We have the best selection, at the best prices, anywhere on the internet.

Your tickets will be delivered by FedEx and all our transactions come with a 100% satisfaction guarantee. It’s a no brainer. The best place to buy Coheed and Cambria tickets is at Clickitticket! 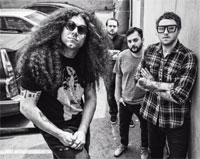