Our Brantley Gilbert Orange Beach 4/18/20 ticket prices are often cheaper than the rest, our checkout and servers are secure, and all Brantley Gilbert The Wharf Amphitheatre tickets are 100% guaranteed.

Click on the red 'View Tickets' button above to see all the available tickets for that The Wharf Amphitheatre concert, along with an interactive seating chart that will help you locate the best seats for your price. After you choose how many The Wharf Amphitheatre tickets you want, you'll be brought to our secure checkout to finalize your Brantley Gilbert Orange Beach concert tickets purchase.

Brantley Gilbert was born Jan. 29, 1985 in Jefferson, Georgia. When he was nineteen, Gilbert was involved in a serious auto accident while under the influence of alcohol.

The incident inspired Gilbert to focus all of his efforts on country music.

His first album, Modern Day Prodigal Son, was supposed to be released in 2006 but it didn't see the light of the day until 2009.

The opus produced nary a single but the track "My Kinda Party" was later covered by Jason Aldean (he also covered Gilbert's "The Best of Me").

His third studio album came out in late 2013.

The country music star is a consummate performer and has toured with a number of big-time artists including Willie Nelson, Aaron Lewis, Josh Philips and Toby Keith.

In July of 2012, Brantley Gilbert tickets were collected for the first time as a headliner. His "Hell on Wheels Tour" also featured sets by Uncle Kracker and Kip Moore. In 2018 Barntley Gilbert is touring with Aaron Lewis & Josh Philips. 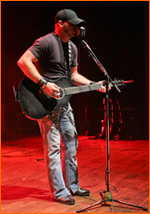