Booking your Blue Rodeo tickets here is easy and secure. Either choose the Blue Rodeo concert above to purchase them online, or call us at 1-866-837-0608.

You can search the times and dates in the tour schedule above to find the specific Blue Rodeo concert you want to attend.

Click on the red 'View Tickets' button to see all the available seats for that Blue Rodeo show, along with an interactive seating chart that will help you locate the best seats for your price.

You'll have to choose how many tickets you want to purchase for the Blue Rodeo concert tour, and then you'll be brought to our secure checkout.

Shipping/Delivery Information for Blue Rodeo Tickets:
You can choose either standard or express delivery and you can specify special delivery instructions if necessary. Your live music concert tickets will be shipped to you using Federal Express.

Also, some tickets to the Blue Rodeo tour may be available for immediate download as e-tickets, or electronic tickets, that you can print right from your device.

Blue Rodeo is a Canadian band that formed in the mid-1980s.  They are one of the most popular and successful contemporary bands the Great White North has ever produced.

Blue Rodeo has released more than a dozen studio albums, they have their own star on Canada’s Walk of Fame, and they’ve been inducted into the Canadian Music Hall of Fame (2012).

The band has sold Blue Rodeo tickets all over the world.  The first ever Blue Rodeo concert took place in 1985 at The Rivoli in Toronto.

“Country,” “rock,” and “alternative” are all genres that have been used to describe Blue Rodeo’s music.   While broad, you couldn’t pick three better words.


Blue Rodeo employs the storytelling and instrumentation of country music, the rebellious spirit of rock, and the aesthetic of alternative.  Chances are very good that if you’re a fan of just one of the aforementioned genres, you’ll be a fan of Blue Rodeo.

Bands similar to Blue Rodeo include The Tragically Hip, Spirit of the West, Cuff the Duke, and 54-40.


Multi-instrumentalist Kim Deschamps joined in 1993 and guitarist Colin Cripps came aboard in 2013.

Cuddy and Keelor were high school friends who formed a band after attending University.  In fact, they formed several.


They also relocated from Toronto to New York City and then back to Toronto.  While in the Big Apple, they met Bob Wiseman.

Upon returning to Toronto, they brought in Cleave Anderson and Bazil Donovan.  Thus, Blue Rodeo was born.

Blue Rodeo released their first studio album, Outskirts, in 1987.  Their most successful studio platter is 1993’s Five Days in July. And Blue Rodeo often tours. You can catch them live in your city with tickets from ClickitTicket. 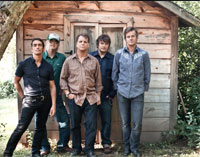