Booking your Billy Joel tickets here is easy and secure. Either choose the Billy Joel concert above to purchase them online, or call us at 1-866-837-0608.

You can search the times and dates in the tour schedule above to find the specific Billy Joel concert you want to attend.

Click on the red 'View Tickets' button to see all the available seats for that Billy Joel show, along with an interactive seating chart that will help you locate the best seats for your price.

You'll have to choose how many tickets you want to purchase for the Billy Joel concert tour, and then you'll be brought to our secure checkout.

Shipping/Delivery Information for Billy Joel Tickets:
You can choose either standard or express delivery and you can specify special delivery instructions if necessary. Your live music concert tickets will be shipped to you using Federal Express.

Also, some tickets to the Billy Joel tour may be available for immediate download as e-tickets, or electronic tickets, that you can print right from your device.

Billy Joel didn’t graduate from high school. He missed too many classes playing at bars trying to earn money for his family. Joel didn’t seem to mind. As a reluctant child prodigy, Joel knew that he wasn’t going to Columbia University but was going to sign with Columbia Records.

He eventually signed with Columbia Records and went on to sell more than 150 million records. He’s the third-best-selling solo artist in the history of the United States. His Greatest Hits Vol. 1 & 2 is the third bestselling album ever in the U.S.

Joel’s success rests on his piano playing prowess and his ability to write catchy pop songs that are both accessible and profound. His signature song is his 1973 hit, “Piano Man.”

Other quintessential Joel compositions are "Just the Way You Are," "Movin' Out (Anthony's Song)," "Only the Good Die Young," "My Life," "Big shot," "Allentown," and the campy "We Didn't Start the Fire."

The Grammy nominated album honors American popular music from the late 1950s and early 1960s. It contains the cuts “The Longest Time,” “Tell Her About It,” “Uptown Girl” and “Keeping the Faith.”

Known primarily as a singer-songwriter, Joel is also one of popular music’s top live performers. Since the early 1970s, Billy Joel tickets have been collected all over the world. He has sold out 12 shows at Madison Square Garden in New York City, 46 concerts at Philadelphia’s Wells Fargo Center, and 10 performances at the Mohegan Sun Casino in Uncasville, Connecticut. He’s also the highest grossing act ever at the Times Union Center in Albany, New York. Joel played the final concerts at Shea Stadium and his joint tours with Elton John consistently break box office records.

Not everything Joel touches turn to gold. There have been some dark times in his life. He tried to commit suicide in 1970. His debut album was mastered incorrectly and his voice sounded a semitone higher. He was ripped off by not one but two managers. His famous tour of Russia allegedly cost him $1 million of his own money. In 2002 and 2005, he entered treatment centers for substance abuse. But perhaps the worst thing that ever happened to him was divorcing Christine Brinkley. How bad do things have to be for you to divorce one of the world’s greatest super models? 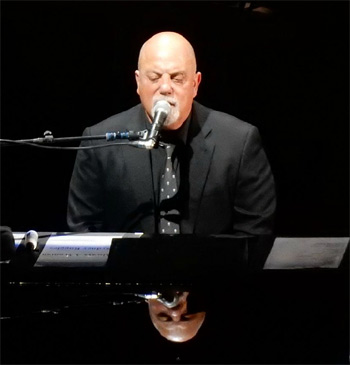