Booking your Barry Manilow tickets here is easy and secure. Either choose the Barry Manilow concert above to purchase them online, or call us at 1-866-837-0608.

You can search the times and dates in the tour schedule above to find the specific Barry Manilow concert you want to attend.

Click on the red 'View Tickets' button to see all the available seats for that Barry Manilow show, along with an interactive seating chart that will help you locate the best seats for your price.

You'll have to choose how many tickets you want to purchase for the Barry Manilow concert tour, and then you'll be brought to our secure checkout.

Shipping/Delivery Information for Barry Manilow Tickets:
You can choose either standard or express delivery and you can specify special delivery instructions if necessary. Your live music concert tickets will be shipped to you using Federal Express.

Also, some tickets to the Barry Manilow tour may be available for immediate download as e-tickets, or electronic tickets, that you can print right from your device.

When it comes to music, Barry Manilow is a jack of all trades. He's worked as an arranger, composer, musician, producer, and performer. He broke into the business as an arranger, producer and pianist and then became an award winning composer of jingles. Some of his most well-known commercial work includes jingles for Band-Aid and State Farm Insurance. He also sung McDonald's "You Deserve A Break Today."

For years, at Barry Manilow concerts, the singer would perform these classic jingles in a medley. In the early 1970's, Manilow began his collaboration with singer Bette Milder. He helped with the production on a couple of her albums and served as her musical director for her "Divine Miss M Tour."

Manilow released his first album in 1973. It was simply called Barry Manilow but reissued a couple of years later as Barry Manilow I. In 1974, Manilow released his sophomore effort, Barry Manilow II. The LP contained his breakout single "Mandy," a song written by Scott English and Richard Kerr. It was originally called "Brandy." English released a version of the song in 1971 and it became a hit in the UK. Manilow's version however has become the definitive version of the song.

"Mandy" went to number one and started an impressive stretch for Manilow in which he dominated the charts. Before the end of the decade, Manilow sent three singles to the top of the Hot 100 and ten to the top of the Adult Contemporary Chart. Manilow's only number one album of the 1970s was Barry Manilow Live. In 1978, Manilow had five albums on the Billboard 200, a rare feat that's only been accomplished by artists like Frank Sinatra, Bruce Springsteen, and Michael Jackson. In the late 1970s and early 1980s, Manilow had four television specials that aired on ABC.

The special that aired in 1977, and guest starred Penny Marshall, was seen by 37 million people. In 1985, Manilow starred in a television movie based on his song "Copacabana."

Manilow achieved his commercial success during a time when popular music was dominated by hard rock acts like Led Zeppelin, KISS, and Pink Floyd. Since Manilow's music was mellow and melodious he was often perceived as the epitome of "uncool," also known as "adult contemporary."

In actuality, Manilow, who has a tremendous sense of humor about himself and his music, is an extremely talented musician and songwriter who's an even better performer. Manilow concerts have sold out major venues like Wembly Stadium, Royal Albert Hall, and the Greek Theater in Los Angeles. He's also sold thousands of Barry Manilow tickets to multiple residency shows in Las Vegas. His most ardent fans call themselves "Fanilows." 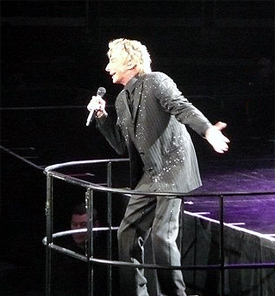