You can search the times and dates in the tour schedule above to find the specific Australian Pink Floyd Show concert you want to attend.

Click on the red 'View Tickets' button to see all the available seats for that Australian Pink Floyd Show show, along with an interactive seating chart that will help you locate the best seats for your price.

You'll have to choose how many tickets you want to purchase for the Australian Pink Floyd Show concert tour, and then you'll be brought to our secure checkout.

Shipping/Delivery Information for Australian Pink Floyd Show Tickets:
You can choose either standard or express delivery and you can specify special delivery instructions if necessary. Your live music concert tickets will be shipped to you using Federal Express.

Also, some tickets to the Australian Pink Floyd Show tour may be available for immediate download as e-tickets, or electronic tickets, that you can print right from your device.

The Australian Pink Floyd Show is not just any tribute band. They are the greatest tribute band of all-time. In their live shows, they manage to recreate the sound, look, and feel of a real Pink Floyd concert. The Australian Pink Floyd Show uses lasers, a large video screen, intelligent lights, and inflatables just like their heroes. Their use of technology doesn’t stop there. In 2011, TAPFS became the first band to incorporate 3D stereoscopic projection in a tour.

To duplicate the many nuances of Pink Floyd, The Australian Pink Floyd Show has collaborated with lots of people who have worked with the actual band. That includes sound engineer Colin Norfield, guitar technician Pete Cornish, and drum technician Clive Brooks. In June of 2011, TAPFS also performed with bassist Guy Pratt, a former session player for Pink Floyd.

The greatest moment in TAPFS history came in 1996 when they played at David Gilmour’s 50th Birthday party. It’s pretty rare for a tribute band to play for a member of the band they’re honoring. Gilmour saw TAPFS perform in 1994 and was so enamored by the band that he invited them to an end-of-tour party (“The Division Bell Tour”).

The tribute band was formed in 1988 in Adelaide. The lineup has changed a lot over the years. The only two remaining members left are guitarist and vocalist Steve Mac and keyboardist Jason Sawford. Bassist and vocalist Colin Wilson joined in 1993.

In 2011, Lorelei McBroom joined TAPFS as a backing vocalist. McBroom toured with the real Pink Floyd in 1988 and 1989. Lorelei’s sister, Durga, who also toured with the band (she was a backup singer during their Momentary Lapse of Reason and Division Bell tours), once joined TAPFS on stage in Anaheim to sing “The Great Gig in the Sky.”

Since forming in the late 1980s, the tribute band has sold more than four million Australian Pink Floyd Show tickets and performed in 35 countries. They have also played at the Sweden Rock Festival, Malta Jazz Festival, Isle of Wright Festival, and Hampton Court Palace Festival.

When you attend The Australian Pink Floyd Show you’ll hear all the great Pink Floyd songs like “Money,” “Comfortably Numb,” “Run Like Hell” and “Another Brick In The Wall.” 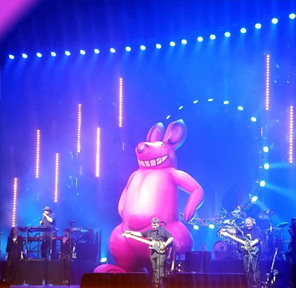