You can search the times and dates in the tour schedule above to find the specific August Burns Red concert you want to attend.

Click on the red 'View Tickets' button to see all the available seats for that August Burns Red show, along with an interactive seating chart that will help you locate the best seats for your price.

You'll have to choose how many tickets you want to purchase for the August Burns Red concert tour, and then you'll be brought to our secure checkout.

Shipping/Delivery Information for August Burns Red Tickets:
You can choose either standard or express delivery and you can specify special delivery instructions if necessary. Your live music concert tickets will be shipped to you using Federal Express.

Also, some tickets to the August Burns Red tour may be available for immediate download as e-tickets, or electronic tickets, that you can print right from your device.

If you could somehow fully plug your ears, and completely cover your eyes, at an August Burns Red concert, you’ll still be able to know when the band starts playing. You’ll know because you’ll feel their energy.
August Burns Red is one of today’s most energetic touring bands. Their shows are a non-stop thrill ride. You’ll spend the entire concert singing along, banging your head, and/or surviving their epic moshpits.
August Burns Red is a metalcore band from Lancaster, Pennsylvania. The band consists of JB Brubaker, Dustin Davidson, Matt Greiner, Jake Luhrs, and Brent Rambler.
Jon Hershey and Jordan Tuscan were original members. Josh McManness was the band’s lead vocalist for two years. He was in the group between Hershey and Luhrs.
ABR released their first album, Thrill Seeker, in 2005. They released their seventh album, Phantom Anthem, in 2017.
Some of the band’s biggest songs are "Thirty and Seven," "Spirit Breaker," and "Invisible Enemy." Many of the band’s songs have Christian themes.
There are several apocryphal stories behind the name “August Burns Red,” including one involving an ex-girlfriend, a dog, and a fire. The band’s name has no meaning. It’s just a phrase the members created from scratch. 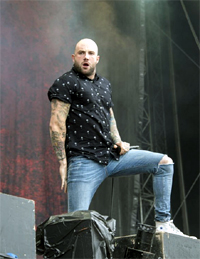