Booking your Alice Cooper tickets here is easy and secure. Either choose the Alice Cooper concert above to purchase them online, or call us at 1-866-837-0608.

You can search the times and dates in the tour schedule above to find the specific Alice Cooper concert you want to attend.

Click on the red 'View Tickets' button to see all the available seats for that Alice Cooper show, along with an interactive seating chart that will help you locate the best seats for your price.

You'll have to choose how many tickets you want to purchase for the Alice Cooper concert tour, and then you'll be brought to our secure checkout.

Shipping/Delivery Information for Alice Cooper Tickets:
You can choose either standard or express delivery and you can specify special delivery instructions if necessary. Your live music concert tickets will be shipped to you using Federal Express.

Also, some tickets to the Alice Cooper tour may be available for immediate download as e-tickets, or electronic tickets, that you can print right from your device.

That’s not to say an Alice Cooper concert today is exactly what it was in the seventies, but "The Godfather of Shock Rock" is still shocking and rocking.

Well, “shocking” is a bit of a hyperbole. What was shocking in the 1970s is now rather sanitized. Still, if you have Alice Cooper tickets expect a lot of rock n’ roll and a lot of the macabre.

Does An Alice Cooper Concert Still Include All The Theatrics?

The answer to that question is a resounding yes. An Alice Cooper concert is a rock show.

Granted, every Alice Cooper tour is different, but in recent years the Rock and Roll Hall of Famer has employed a Vincent Price voice over, a psycho nurse, a boa constrictor, and a giant Frankenstein.

Cooper has even been known to have his head sliced off in a make-believe guillotine. You’ve got to love a rock and roller with the sense of humor to lob off his own head.

How Does Alice Cooper Sound In Concert?

Alice Cooper sounds great in concert. Then again, he never really had an awesome voice to begin with. So even if his pipes have lost a step or two you really can’t tell.

Cooper hasn’t been in the business for nearly 50 years because he’s a fool. The singer surrounds himself with a bevy of great musicians.

Alice Cooper’s backup band stars guitarists Ryan Roxie, Tommy Henriksen, and Nita Strauss. His bassist is Chuck Garric and his drummer is Glen Sobel. All but Sobel sing back up.

These aren’t five musicians thrown together at the last minute and then paid to learn Cooper’s material. They are a bona fide rock band. The guitar play is phenomenal and the rhythm section brings it every night.

When you see Alice Cooper live you’ll notice that his band plays off one another, positively interacts between songs, and overall has a great time playing music together.

What Songs Does Alice Cooper Play In Concert

Alice Cooper is not going to disappoint fans. He’ll play his hits like “No More Mr. Nice Guy,” “Under My Wheels,” “I’m Eighteen,” and “Billion Dollar Babies.” He might also throw in a few rock covers for good measure.

Of course, Cooper ends his show with his classic “School’s Out,” a song he released in 1972.

And in 2018 Alice Cooper is on his “A PARANORMAL EVENING WITH ALICE COOPER” tour, and you can get your tickets here. 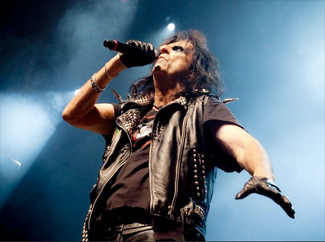