Booking your Air Supply tickets here is easy and secure. Either choose the Air Supply concert above to purchase them online, or call us at 1-866-837-0608.

You can search the times and dates in the tour schedule above to find the specific Air Supply concert you want to attend.

Click on the red 'View Tickets' button to see all the available seats for that Air Supply show, along with an interactive seating chart that will help you locate the best seats for your price.

You'll have to choose how many tickets you want to purchase for the Air Supply concert tour, and then you'll be brought to our secure checkout.

Shipping/Delivery Information for Air Supply Tickets:
You can choose either standard or express delivery and you can specify special delivery instructions if necessary. Your live music concert tickets will be shipped to you using Federal Express.

Also, some tickets to the Air Supply tour may be available for immediate download as e-tickets, or electronic tickets, that you can print right from your device.

Regardless of what genre you’re into—whether it’s grindcore or horrorcore—when an Air Supply song comes through the speaker you’re singing along.  Air Supply is the one soft rock band everybody loves.

For more than four decades, Air Supply has delighted fans all over the world with their catchy melodies, romantic lyrics, and great live shows.

Who Are The Two Guys In Air Supply?

Over the years, Air Supply has enjoyed the talents of nearly 30 musicians.  The only two constant members, and the creative force behind their success, are vocalist Russell Hitchcock and guitarist Graham Russell.  The two met while working on a production of Jesus Christ Superstar.

Where Can I Buy Air Supply Tickets?

What Albums Have Air Supply Released?

Air Supply released their self-titled debut studio album in 1976.  They followed that up with the Whole Thing’s Started and Love & Other Bruises in 1977.  Then, just before the end of the 1970s, they issued Life Support.

The albums performed respectively well in their native Australia but failed to chart anywhere else.  Still, Air Supply was good enough to support Rod Stewart when her toured Australia in late 1977.

What Was Air Supply’s Big Break?

Air Supply became international superstars in 1980 thanks to their studio offering, Lost In Love.  The album peaked at number 22 in the United States and eventually captured a 2x platinum certification from the RIAA.

In 1981, Air Supply put out The One That You Love.  Co-produced by David Foster, the LP peaked at number ten in the U.S.  The band’s 1982 album, Now and Forever, stalled at number 25.  Both works earned Platinum status.

How Can I Get Air Supply Tickets?

What Are Some Air Supply Songs?

Air Supply’s biggest selling album is Greatest Hits from 1983.  The compilation has been certified 5x platinum and contains such classics as “Lost in Love,” “All Out of Love,” “The One That You Love,” “Even the Nights Are Better,” and "Here I Am (Just When I Thought I Was Over You)."

What Are Some Of Air Supply’s Major Accomplishments?

Air Supply has enjoyed eight top ten hits in the U.S., they are members of the Australian Recording Industry Association’s Hall of Fame, and in 2005 they played to more than 170,000 fans in Havana, Cuba.

Perhaps their greatest accomplishment is their longevity.  The band celebrated their 40th anniversary in 2015 and they’re still adored by fans all over the world. 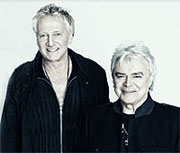