Adele tickets can be purchased here where you'll discover a gigantic choice of affordable concert tickets.

Booking your Adele tickets here is easy and secure. Either choose the Adele concert above to purchase them online, or call us at 1-866-837-0608.

You can search the times and dates in the tour schedule above to find the specific Adele concert you want to attend.

Click on the red 'View Tickets' button to see all the available seats for that Adele show, along with an interactive seating chart that will help you locate the best seats for your price.

You'll have to choose how many tickets you want to purchase for the Adele concert tour, and then you'll be brought to our secure checkout.

Adele ticket prices may be above or below face value and can fluctuate. You'll find cheap concert tickets here at relatively affordable prices.

Shipping/Delivery Information for Adele Tickets:
You can choose either standard or express delivery and you can specify special delivery instructions if necessary. Your live music concert tickets will be shipped to you using Federal Express.

Also, some tickets to the Adele tour may be available for immediate download as e-tickets, or electronic tickets, that you can print right from your device.

Adele might be the biggest singer in the world.  She’s one of the few 21st century artists that can actually sell albums.

Her debut studio offering, 19, which was released in 2008, has sold more than 7 million copies.  It earned her an historic appearance on Saturday Night Live and two Grammy Awards.

Her sophomore effort, 21, issued in 2011, has moved more than 31 million copies.  The album won six Grammy Awards, is the fourth bestselling album of all-time in the U.K., and is the longest running number one album by a female in both the U.K. and the U.S.

Her follow-up platter, 25 (released in 2015), is the fastest selling album in U.K. chart history.  In the U.S., it sold 3.38 million copies in its first week on the streets.  That’s the best sales week by an artist since 1991—when Nielsen began keeping track of such things.

What Are Adele’s Biggest Songs?

Adele singles that have sold at least one million units include "Rolling in the Deep," “Someone like You,” “Set Fire To The Rain,” “Rumour Has It,” “Hello,” and “Skyfall.”

“Skyfall,” recorded for the James Bond film of the same name, earned Adele a Grammy Award, an Oscar Award, and a Golden Globe Award.  She co-wrote the song with Paul Epworth.

Are Adele Tickets Sold Out?

Clickitticket’s inventory is the largest on the Web.  That means we can get you in to see Adele at Madison Square Garden or at Staples Center or at any venue in between.  Your tickets will arrive via FedEx and they’ll arrive long before the concert begins.

Are Adele tickets sold out?  They’re never sold out if you use Clickitticket.

Adele’s brand of pop is heavily influenced by soul and R&B.  Some call her sound “blue-eye soul.”

The singer possesses the voice of an angel.  To put it another way, she’s a mezzo-soprano with a vocal range of about two octaves.

Her pipes have the dexterity of Ella Fitzgerald, the passion of Etta James, and the control of Roberta Flack.  Add to that amazing timbre, soulful phrasing, and spot-on emoting, it’s no wonder that many call Adele the greatest singer of her generation.

Why Is Adele So Popular?

What makes Adele’s music so popular is it transcends genres and generations.  Her fan base isn’t a particular demographic, it’s the entire world.

How Often Does Adele Tour?

Despite what you’d think from one of the biggest music stars in the world, Adele tours are few and far between.  During the first nine years of her career she embarked on just three headlining tours.

Her second major trek, Adele Live (2011), was marred by health and vocal problems.  Adele was forced to cancel several concerts in order to undergo throat surgery.

How Can I Get Adele Tickets?

You can get Adele tickets right here at Clickitticket.  Consider us your friend in the music business.  Not only do we have a huge inventory of tickets, but our transaction process is safe, secure, and easy to use.  Best of all, your transaction comes with a 100% satisfaction guarantee.

How can you get Adele tickets?  The answer is simple.  You can get them by using Clickitticket!

When Was Adele Born?

Adele Laurie Blue Adkins was born May 5, 1988 in Tottenham, London.   Adele’s father left when she was two and the singer was courageously raised by her mother.

Adele took up singing at an early age.  Her favorite acts growing up were the Spice Girls, Gabrielle, Madonna, and Amy Winehouse.

She attended and graduated from the BRIT School for Performing Arts & Technology.  One of her classmates was Leona Lewis.

What Was Adele’s Big Break?

In 2006, a friend posted a three-song demo by Adele on MySpace that led to a recording contract.  In fact, Adele released her first single, “Hometown Glory,” the following year.

Her big break in America came in 2008 thanks to a performance on Saturday Night Live.  Before her SNL appearance, Adele had pretty much fizzled in the U.S.

Fortunately, her Saturday Night Live debut corresponded with a special guest appearance from Sarah Palin, who was running for U.S. vice-president at the time.  The episode attracted more than 17 million eyeballs and jump started Adele’s American career. 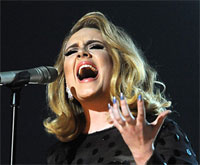