Kiss tickets can be purchased here where you'll discover a massive choice of affordable concert tickets.

Booking your Kiss tickets here is easy and secure. Either choose the Kiss concert above to purchase them online, or call us at 1-866-837-0608.

You can search the times and dates in the tour schedule above to find the specific Kiss concert you want to attend.

Click on the red 'View Tickets' button to see all the available seats for that Kiss show, along with an interactive seating chart that will help you locate the best seats for your price.

You'll have to choose how many tickets you want to purchase for the Kiss concert tour, and then you'll be brought to our secure checkout.

Kiss ticket prices may be above or below face value and can fluctuate. You'll find cheap Kiss tickets here at relatively affordable prices.

Shipping/Delivery Information for Kiss Tickets:
You can choose either standard or express delivery and you can specify special delivery instructions if necessary. Your live music concert tickets will be shipped to you using Federal Express.

Also, some tickets to the Kiss tour may be available for immediate download as e-tickets, or electronic tickets, that you can print right from your device.

Because they had proven themselves as an electrifying live act, the next move was a double live album in 1975. Alive! managed to capture some of that magic and went gold, largely on the strength of "Rock and Roll All Nite” which cracked the Top 40. Keeping the mojo going, Destroyer also went gold in 1976. Then, with the release of the single "Beth," which climbed to number seven on the charts, a Kiss resurgence occurred. The album went platinum and their tours sold out.

Records started coming out at a brisk clip with Rock and Roll Over in late 1976 and Love Gun in mid-1977. Alive II followed in late 1977. All three sold more than a million copies each and led to Kiss becoming a bonafide worldwide phenomenon. They even sold out five shows at Japan's Budokan Hall, breaking the Beatles' record of four.

In an interesting and massive marketing move, the members of Kiss simultaneously released four solo albums under the band's umbrella. Although they all broke the top 50 on the album charts, interest and sales quickly slumped leaving the enormous quantities of pre-orders to linger in the bargain bins.

The second part of the marketing blitz came in the form of a film, Kiss Meets the Phantom of the Park. They were numerous creative difficulties during the production and it met with scathing reviews yet, when it debuted on NBC, it became the most-watched TV movie of 1978.

Getting back to basics, Dynasty continued their million-selling run and yielded their biggest hit to date in "I Was Made for Lovin' You." The Dynasty Tour, dubbed "The Return of Kiss," was anything but that. Ticket sales faltered and the creative tensions within the band grew. The final show of the tour would be the last for Criss.

Although he appeared on the cover of 1980's Unmasked, Criss did not play on the record and was officially announced as no longer in the band after it was released. The album missed the platinum mark. Paul Caravello became Eric Carr and took over the drum throne.

Following an unsuccessful concept album (1981's Music from "The Elder" ), Frehley took leave of the group, as well, departing at the end of 1982 with Vinnie Vincent stepping in.

Killers and Creatures of the Night dropped in 1982 with the latter not making it to gold status until 1994. At the end of the Creatures Tour, the band emerged from behind their makeup and headed off for a 10th Anniversary Tour in 1983 along with a glam metal record, Lick It Up. Vincent's Kiss stint didn't last long. Mark St. John was brought in after Lick It Up. Animalize followed in 1984 and managed to generate a boost in sales of both records and tickets. Stricken with arthritis, St. John was fired and replaced by Bruce Kulick.

The mid-80s brought a string of platinum successes, followed by 1989's Hot in the Shade. Although it sold fewer copies, the single "Forever," which was co-written by power ballad master Michael Bolton, peaked at number eight and was the group's highest-charting single since "Beth."

In 1991, Carr began battling cancer and, within a few months, two cerebral hemorrhages. He died on November 24, 1991 (the same day as Freddie Mercury). Having played with Alice Cooper and Black Sabbath, Eric Singer came in.

Something of a Kiss resurrection happened once again in the mid-90s with a tribute album, a book, and more. After an appearance on MTV Unplugged that saw Criss and Frehley sit in on a few tunes, rumors began circulating about a reunion of the original line-up.

On February 28, 1996, Tupac Shakur said on the Grammy Awards that “We need something different ...something new... we need to shock the people... so let's shock the people!” The curtain rose and there was Kiss, in all of their original, outfitted glory. The subsequent reunion tour sold like wildfire.

Although their 1998 Psycho Circus record featured Criss and Frehley in the artwork, they actually offered minimal musical contributions to it. Nevertheless, it entered the charts at number three with the title track earning a Grammy nod for Best Hard Rock Performance.

Early 2000 saw a Farewell Tour on the horizon which ended up running through April of 2001. In January of that year, Criss bolted and was replaced by Singer who donned the Catman persona for the rest of the tour. The Farewell Tour proved to not be their last, as Kiss continued playing together. In 2003, they embarked on a tour with Aerosmith. Frehley left, having believed the Farewell Tour was the end. Tommy Thayer signed on in his wake.

After a few more tumultuous years, 2008 found Kiss headlining all sorts of big festivals and embarking on their Kiss Alive/35 World Tour. They even appeared on American Idol in 2009 backing Adam Lambert on versions of "Detroit Rock City" and "Rock and Roll All Nite." Later that year, Sonic Boom was released and debuted at number two on the Billboard album charts.

Following up May 2010's Sonic Boom Over Europe: From the Beginning to the Boom Tour, Kiss launched The Hottest Show on Earth Tour in the U.S. in July of 2010 and is touring in 2011 too. 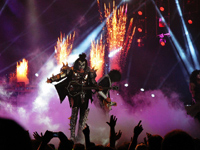