5 Seconds of Summer tickets can be purchased here where you'll discover a gigantic selection of affordable concert tickets.

How to Buy 5 Seconds of Summer Tour Tickets Here

You can search the times and dates in the tour schedule above to find the specific 5 Seconds of Summer concert you want to attend.

Click on the red 'View Tickets' button to see all the available seats for that 5 Seconds of Summer show, along with an interactive seating chart that will help you locate the best seats for your price.

You'll have to choose how many tickets you want to purchase for the 5 Seconds of Summer concert tour, and then you'll be brought to our secure checkout.

Shipping/Delivery Information for 5 Seconds of Summer Tickets:
You can choose either standard or express delivery and you can specify special delivery instructions if necessary. Your live music concert tickets will be shipped to you using Federal Express.

Also, some tickets to the 5 Seconds of Summer tour may be available for immediate download as e-tickets, or electronic tickets, that you can print right from your device.

How Can I Buy 5SOS Tickets?
You can purchase 5SOS tickets right here on Clickitticket.  Our checkout process is fast, easy, and 100% secure.  Your Five Seconds of Summer tickets will be delivered directly to you by Federal Express and you’ll receive them well before the boys take the stage.

Are 5SOS A Boy Band?
Five Seconds of Summer have been labeled a boy band.  That’s not surprising since all four members were teenagers when their self-titled, debut album came out in June of 2014.

Besides being young, handsome, and charming, 5SOS is not your typical boy band.  They play their own instruments and write, or co-write, their own material.

Whether you label them a boy band or not, you must see 5SOS live.  To hear just how good 5 Seconds of Summer sounds in concert check out their 2014 live album, LiveSOS.

Are 5SOS Tickets Expensive?
Let’s be honest, 5 Seconds of Summer tickets are a hot item; the band usually play to sold out venues.   Still, you’ll be able to find great seats on Clickitticket.

We not only have a vast selection, but our prices are the best on the internet.  Buying concert tickets from Clickitticket means you’ll have enough money left over for a 5SOS tour shirt.

Five Seconds of Summer Rocks
The quartet is known for their songs “She Looks So Perfect,” “Don’t Stop,” “Good Girls,” “Amnesia,” “Hey Everybody,” and “She’s Kinda Hot.”

Their self-titled debut album dropped June 27, 2014.  The opus went to number one in at least eight countries including their native Australia, Canada, and the United States.

Five Seconds of Summer tours frequently.  They launched their first headlining trek, “Rock Out With Your Socks Out Tour,” in May of 2015.  Their “Sounds Live Feels Live Tour” launched April 5, 2016 in Sheffield, England.

Where Can I Buy 5SOS Tickets?
You can buy 5SOS tickets right here at Clickitticket and do so with confidence.  Our transaction process is absolutely safe and amazingly fast.  Your tickets will be sent to you and you’ll have them long before Five Seconds of Summer rolls into town.

So, don’t miss out on one of the best young bands to come around in a long time.  Get your 5SOS tickets today for their Youngblood Tour 2018. 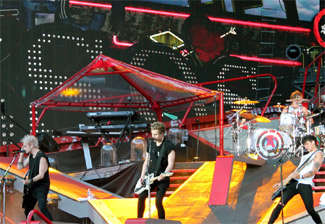