Cirque du Soleil tickets can be purchased here where you'll discover a gigantic choice of tickets.

Booking your Cirque du Soleil tickets here is easy and secure. Either choose the Cirque du Soleil performance above or call us at 1-866-837-0608. We're committed to getting you into the perfect theater seats for your budget.

You can search the times and dates above to find the specific Cirque du Soleil show you want to attend.

Click on the red 'Tickets' button to see all the available seats for that Cirque du Soleil performance, along with an interactive seating chart that will help you locate the best seats for your price.

You'll have to choose how many tickets you want to purchase for Cirque du Soleil, and then you'll be brought to our secure checkout.

You'll be brought to the seating chart where you can sort from the cheapest to the highest pricing. Discover a wide range of cheap Cirque du Soleil tickets, including discount seats or last-minute ticekts, premium seating, center stage, balcony, box seats and orchestra seating too.

Shipping/Delivery Information for Cirque du Soleil Tickets:
You can choose either standard or express delivery and you can specify special delivery instructions if necessary. Your theater tickets will be shipped to you using Federal Express.

Also, some Cirque du Soleil tickets may be available for immediate download as e-tickets, or electronic tickets, that you can print right from your device.

We owe Cirque Du Soleil’s existence to French explorer Jacques Cartier. Cartier didn’t invent the circus nor did he have anything to do with performing in front of audience.

In fact, Cartier died more than 400 years before Cirque Du Soleil was even founded. So what does a guy born in the 15th century have to do with a circus from the 20th century?

Well, Cartier found for France what is now called Canada. In 1983, the province of Quebec, to celebrate the 450th anniversary of Cartier’s discovery, gave a $1.5 million to grant to Guy Laliberte to produce a traveling circus.

Laliberte used the money to create “Le Grand Tour du Cirque du Soleil.” It was resounding success. It was also the start of what we know as Cirque du Soleil (Circus of the Sun).

Had Cartier never discovered Canada, Quebec would have never needed a circus, and the world would have been deprived of one of the greatest entertainment companies of all-time.

Nowadays, Cirque productions are seen on six continents by millions and millions of fans. In 2013 alone the company is expected to sell 15 million Cirque du Soleil tickets. Speaking of 2013, when that year began Cirque had 19 productions playing all over the world including seven in Las Vegas (The Beatles Love, Ka, Criss Angel Believe, O, Mystere, Zarkana, and Zumanity).

The company employs more than 5,000 artists, creators, and technicians. Those employees hail from 50 countries and speak more than 20 different languages.

What exactly is Cirque Du Soleil? Basically, it’s a circus without any animals and with the creativity turned to maximum. Cirque blends the so-called circus arts with music, drama, brilliant costumes, and breathtaking sets.

They use all these elements to create drama and tell stories. Over the years, Cirque has tackled a variety subjects from Shakespeare’s The Tempest (Amaluna) to the world of cinema (Iris). They even have a show about insects (Ovo) and one performed in and around water (O).

Those with Cirque tickets, regardless of the show, should expect an eye-popping, jaw-dropping, heart-pounding performance. You’ll likely to see amazing acrobatics, spectacular stunts, and dazzling dancing. All of the aforementioned elements are choreographed to mesmerizing musical scores.

Cirque values creativity above all else and are dedicated to transporting audiences to a magical world where anything is possible. Basically, each of their shows is a work of art. 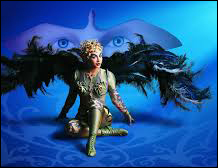