The Lion King tickets can be purchased here where you'll discover a gigantic selection of tickets.

Booking your The Lion King tickets here is easy and secure. Either choose the The Lion King performance above or call us at 1-866-837-0608. We're committed to getting you into the best theater seats for your budget.

How to Buy The Lion King Tickets Here

You can search the times and dates above to find the specific The Lion King show you want to attend.

Click on the red 'Tickets' button to see all the available seats for that The Lion King performance, along with an interactive seating chart that will help you locate the best seats for your price.

You'll have to choose how many tickets you want to purchase for The Lion King, and then you'll be brought to our secure checkout.

You'll be brought to the seating chart where you can sort from the cheapest to the highest pricing. Discover a wide range of cheap The Lion King tickets, including discount seats or last-minute and low-priced deals, premium seating, center stage, balcony, mezzanine, box seats and orchestra seating too.

Shipping/Delivery Information for The Lion King Tickets:
You can choose either standard or express delivery and you can specify special delivery instructions if necessary. Your theater tickets will be shipped to you using Federal Express.

Also, some The Lion King tickets may be available for immediate download as e-tickets, or electronic tickets, that you can print right from your device.

About The Lion King

With music by Elton John and lyrics by Tim Rice, as well as a musical score created by Hans Zimmer and choral arrangements by Lebo M., The Lion King musical was born from the animated Disney movie that was such a hit in 1994.

The musical adaptation, directed by Julie Taymor, costumes actors as animal accompanied by giant puppets. It got its start at the Orpheum Theatre in Minneapolis in July, 1997. A smash hit, it moved to Broadway three months later for previews at the New Amsterdam Theater, officially opening on November 13, 1997.

In mid-2006, the production moved to the Minskoff Theatre where it has become the eighth-longest running show in Broadway's history.

London opened a staging at the West End's Lyceum Theatre in 1999 that continues its run. Taymor was also at the helm of the UK production.

From 1999 to 2004, Toronto mounted their own Lion King at the Princess of Wales Theatre, while Los Angeles enjoyed a run at the Pantages Theatre from 2000 to 2003. Sydney, Melbourne, Johannesburg, Paris, Taipei, Mexico City, Madrid, and Seoul have also welcomed The Lion King for shorter runs.

A national touring company makes its way around the U.S. with only minor modifications from the Broadway rendition. At one time, two tours were mounted simultaneously. As it strives to be the entertainment capital of the world, Las Vegas opened a Lion King run at Mandalay Bay in 2009.

The Lion King's story is a classic coming-of-age tale set in Africa and centered on a young lion cub named Simba who must learn the ways of good and evil from his father Mufasa in order to take his rightly place in the microcosm that is his world.

Egged on by Simba's Uncle Scar, hyenas, vultures, and wildebeests lure the young cub into harm's way. Soon enough, he meets friends in Timon, the meerkat, and Pumbaa, the warthog, who help guide him back to safety. 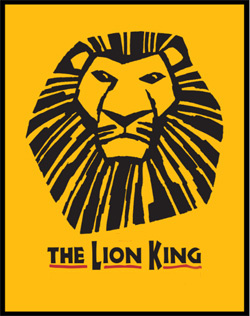