The Illusionists tickets can be purchased here where you'll discover a huge choice of tickets.

Booking your The Illusionists tickets here is easy and secure. Either choose the The Illusionists performance above or call us at 1-866-837-0608. We're committed to getting you into the best theater seats for your budget.

How to Buy The Illusionists Tickets Here

You can search the times and dates above to find the specific The Illusionists show you want to attend.

Click on the red 'Tickets' button to see all the available seats for that The Illusionists performance, along with an interactive seating chart that will help you locate the best seats for your price.

You'll have to choose how many tickets you want to purchase for The Illusionists, and then you'll be brought to our secure checkout.

You'll be brought to the seating chart where you can sort from the cheapest to the highest pricing. Discover a wide range of cheap The Illusionists tickets, including discount seats or last-minute and low-priced deals, premium seating, center stage, balcony, mezzanine, box seats and orchestra seating too.

Shipping/Delivery Information for The Illusionists Tickets:
You can choose either standard or express delivery and you can specify special delivery instructions if necessary. Your theater tickets will be shipped to you using Federal Express.

Also, some The Illusionists tickets may be available for immediate download as e-tickets, or electronic tickets, that you can print right from your device.

The Illusionists: Witness The Impossible is an exciting, amazing, and unique magic show starring the world’s greatest conjurors.

The show will run on Broadway, at the Neil Simoon Theatre, during the 2015 holiday season.  A tour of North America gets underway Sept. 11, 2015 in Springfield, Ohio.

Illusionists tickets will be collected at venues all over North America including those in Hartford, Fort Wayne, Des Moines, Chattanooga, Los Angeles, and Baltimore.

The tour will stretches well into 2016.

This is not your father’s magic show.  Taking a page from Cirque du Soleil’s playbook, The Illusionists is a fast-paced, intense, and stunningly beautiful show.

All of the seven magicians are guaranteed to leave you in awe and completely dumbfounded.  While there are traditional gags such as sawing a man in half and “is this your card?,” all tricks have been updated to blow your mind.

You’ll be leaving the venue wondering “how did they do that?”

Here are the seven acts scheduled to appear in the Illusionists…

“The Anti-Conjuror”
Dan Speery
Speery is the show’s best known talent thanks to appearances on America’s Got Talent.  He specializes in “shock illusions.”  If you’re going to lose your lunch it will be during one of his tricks.

“The Warrior”
Aaron Crow
Crow dazzles his audience with weapon magic.  Who knew that was a thing?  Needless to say, his act will have you on the edge of your seat holding your breath.

“The Manipulator”
Yu Ho-Jin
Basically, Yu performs sleight of hand magic.  Of course, he does so with flare, elegance, and creativity.  He’s so good he’s called “The Future of Magic.”

“The Inventor”
Kevin James
Don’t worry.  He’s not THAT Kevin James.  This Kevin James is one of the world’s most innovated illusionists.  The word that best describe his act is “original.”

“The Escapologist”
Andrew Basso
You can’t hold Basso down.  Literally!  He is, after all, the world’s greatest escape artist.  Many call him the successor to Harry Houdini.  Some even say he’s better.

“The Trickster”
Jeff Hobson
What Hobson lacks in death-defying stunts, cool weaponry, and gross magic tricks, he makes up for it with comedy and showmanship.  You come hoping to see one of the other acts impale themselves (or worse) but you come back to see Hobson.

“The Futurist”
Adam Trent
Trent serves as the show’s emcee, but he’s much more than a good-looking guy in a tailored suit.  He’s a world class magician, dancer, and comedian.  Trent uses technology to create unforgettable illusions. 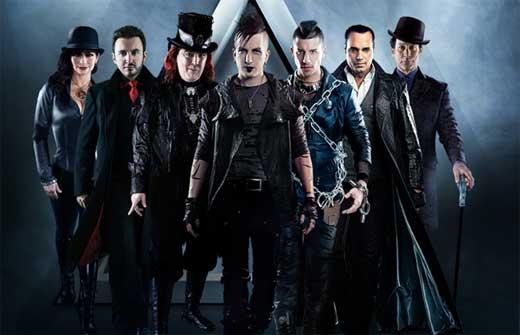