Click on the red 'View Tickets' button above to see all the available tickets for that Des Moines Civic Center scheduled performance in Des Moines, along with an interactive seating chart that will help you locate the best seats for your price. After you choose how many Des Moines Civic Center tickets you want, you'll be brought to our secure checkout to finalize your Broadway tickets purchase.

Looking for the best seats available for The Book Of Mormon at the Des Moines Civic Center in Des Moines? Look no further. There are myriad choices here for theater-goers. Find box seating, balcony seating, orchestra, stage right and left seats, center stage, mezzanine and downloadable e-tickets too. And our Broadway musicals and plays ticket inventory is updated daily.

About Our The Book Of Mormon Des Moines, IA Ticket Prices

As one of the premium national theater ticket-sellers, ClickitTicket works with a trusted and vetted network of event ticket suppliers. Ticket prices are set by the specific supply and demand of the event. All Des Moines Broadway musical and play tickets sold here are 100% guaranteed.

The Book Of Mormon Ticket Shipping/Delivery Information:
You can choose either standard or express delivery for your tickets. There also may be electronic The Book Of Mormon Des Moines tickets (or e-tickets) available for immediate download. Otherwise, tickets are shipped with Federal Express.

About The Book of Mormon

The musical will entertain you for a night but The Book will change your life forever. That was basically The Church of Jesus Christ of Ladder-day Saints’ reaction to the musical The Book of Mormon.

We’re not kidding. That’s was their reaction.

Of course, when you first heard that Trey Parker and Matt Stone, the creators of South Park, along with Robert Lopez, from Avenue Q fame, wrote the music, lyrics, and book to a musical called “The Book of Mormon” you bet your house that the theatre hosting the show (in this case the Eugene O’Neil Theatre) was getting picketed morning, noon, and night.

That wasn’t the case though. While the production raised the dander of a few Mormons, most attendees, regardless of their faith, thoroughly enjoyed the hilarious and well-crafted musical.

Who should be protesting The Book of Mormon are fans of Rogers and Hammerstein, Lerner and Loewe, Jerry Herman, Julie Styne, Jerry Bock, and Meredith Wilson. The Book of Mormon is far tougher on classic musicals than it is on religion.

As Frank Rich noted on the liner notes to the original Broadway cast recording, TBOM follows the formula of musicals from Broadway’s golden age “while fondly spoofing” them.

He then points out how the numbers in The Book of Mormon parallel famous arias from the history of the Great White Way. For example, The Book of Mormon’s “I Believe” is a take on The Sound of Music’s “Climb Ev’ry Mountain.”

The Next Scheduled Performances on the The Book Of Mormon Tour 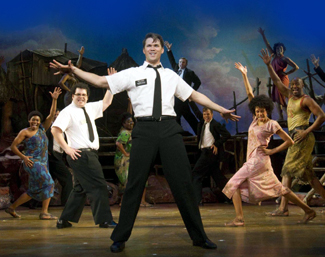