Finding Neverland tickets can be purchased here where you'll discover a massive selection of tickets.

Booking your Finding Neverland tickets here is easy and secure. Either choose the Finding Neverland performance above or call us at 1-866-837-0608. We're committed to getting you into the best theater seats for your budget.

You can search the times and dates above to find the specific Finding Neverland show you want to attend.

Click on the red 'Tickets' button to see all the available seats for that Finding Neverland performance, along with an interactive seating chart that will help you locate the best seats for your price.

You'll have to choose how many tickets you want to purchase for Finding Neverland, and then you'll be brought to our secure checkout.

You'll be brought to the seating chart where you can sort from the cheapest to the highest pricing. Discover a wide range of cheap Finding Neverland tickets, including discount seats or last-minute and low-priced deals, premium seating, center stage, balcony, mezzanine, box seats and orchestra seating too.

Shipping/Delivery Information for Finding Neverland Tickets:
You can choose either standard or express delivery and you can specify special delivery instructions if necessary. Your theater tickets will be shipped to you using Federal Express.

Also, some Finding Neverland tickets may be available for immediate download as e-tickets, or electronic tickets, that you can print right from your device.

Finding Neverland opened for previews at the Lunt-Fontanne Theatre on March 15, 2015. It officially opened on April 8. The production debuted as one of the most anticipated musicals in recent memory (at least since Spider-Man: Turn off the Dark). Much of the hype surrounding the production was due to Harvey Weinstein being behind the $11 million project. Finding Neverland is the movie mogul’s first foray as a lead producer of a Broadway show.

Finding Neverland tells the story of J.M. Barrie, the creator of Peter Pan, and his relationship with Sylvia Llewelyn Davies. Barrie’s time with the widow and her family inspired him to create the flying boy from Neverland. The musical is an adaptation of the 2004 film of the same name. The Academy Award winning flick was based on Allan Knee’s play, The Man Who Was Peter Pan.

The musical endured a rocky road to Broadway. The stage adaptation was supposed to premiere at the La Jolla Playhouse in California but plans fell through. After a reading in New York City, the musical hit the boards in Leicester, England in September of 2012.

Weinstein wasn’t happy with the state of the musical. He was so unhappy that he didn’t tweak it, he started over from scratch. He hired a new producer (Barry Weissler), director (Diane Paulus), and book writer (James Graham). He tossed out most of the score and hired Gary Barlow (of Take That fame) and Eliot Kennedy to write 22 new songs.

The new Finding Neverland launched at the American Repertory Theater (ART) in Cambridge, Massachusetts on July 23, 2014. The very successful run ended in late September. Jeremy Jordan (from Newsies) played Barrie. While Jordan is a supreme talent, and received positive reviews, Weinstein cast Matthew Morrison (from Glee) in the lead role for the Broadway production. Also in the original Broadway cast were Kelsey Grammer, Laura Michelle Kelly, and Carolee Carmello. 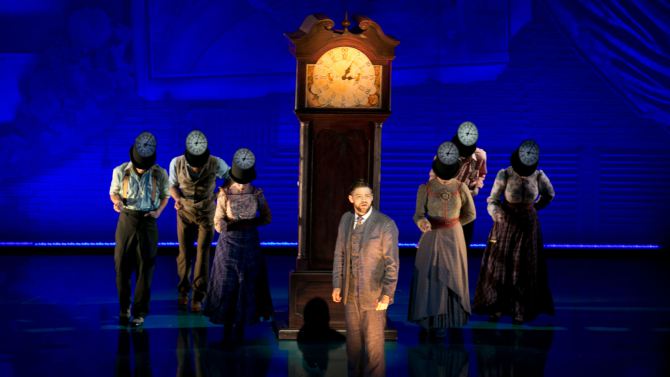