Blue Man Group tickets can be purchased here where you'll discover a huge choice of tickets.

Booking your Blue Man Group tickets here is easy and secure. Either choose the Blue Man Group performance above or call us at 1-866-837-0608. We're committed to getting you into the best show seats for your budget.

You can search the times and dates above to find the specific Blue Man Group show you want to attend.

Click on the red 'Tickets' button to see all the available seats for that Blue Man Group performance, along with an interactive seating chart that will help you locate the best seats for your price.

You'll have to choose how many tickets you want to purchase for Blue Man Group, and then you'll be brought to our secure checkout.

Blue Man Group ticket prices may be above or below face value and can fluctuate. You'll find BMG tickets here at relatively affordable prices. To find the current pricing, click the red 'Tickets' button above.

You'll be brought to the seating chart where you can sort from the cheapest to the highest pricing. Discover a wide range of cheap Blue Man Group tickets.

Shipping/Delivery Information for Blue Man Group Tickets:
You can choose either standard or express delivery and you can specify special delivery instructions if necessary. Your theater tickets will be shipped to you using Federal Express.

Also, some Blue Man Group tickets may be available for immediate download as e-tickets, or electronic tickets, that you can print right from your device.

The Blue Man Group is a hilarious, entertaining, cutting-edge, musical theatre group that stars three performers all wearing blue body paint and generally all-black clothing. They use music, dance, comedy, and multimedia elements to blow the minds of their audience. That description may sound a little vague but according to the group’s own Website, Blue Man “cannot be explained: it can only be experienced.”

Beginnings
Blue Man Group began in 1987 after Chris Wink and Matt Goldman reunited their friendship in New York City after not seeing one another since they graduated from high school in Manhattan, Kansas. Together with Phil Stanton they formed the Blue Man Group.


Big Break
The group's big break came when the New York Times favorably reviewed one of their early performances. After the positive evaluation, their popularity grew. They won major Off-Broadway theatre awards and performed at the venerated Lincoln Center.

Themes
There are several themes that run through Blue Man Group shows including science, technology, information overload, innocence, self-conscious (or lack thereof), and the outsider. Often, one of the Blue Men will do something different than the other two to comedic effect. Another one of the group’s themes is “climbing to the top.” This is the original Blue Men’s tribute to scholar Joseph Campbell and his universal advice to “follow your bliss.”

Blue Man Group 101
>>The show runs 90 to 105 minutes with no intermission
>>Appropriate for the entire family
>>The Blue Man Group doesn't speak
>>There are currently Blue Man shows running all over the world including New York, Chicago, and Orlando
>>The shows are the same but differ in size and scope
>>The "Poncho Section" are the first few rows closest to the stage. These patrons may sometimes be splashed with harmless and washable debris. 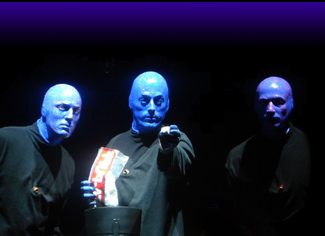