Beautiful: The Carole King Musical tickets can be purchased here where you'll discover a massive selection of tickets.

How to Buy Beautiful: The Carole King Musical Tickets Here

You can search the times and dates above to find the specific Beautiful: The Carole King Musical show you want to attend.

Click on the red 'Tickets' button to see all the available seats for that Beautiful: The Carole King Musical performance, along with an interactive seating chart that will help you locate the best seats for your price.

You'll have to choose how many tickets you want to purchase for Beautiful: The Carole King Musical, and then you'll be brought to our secure checkout.

You'll be brought to the seating chart where you can sort from the cheapest to the highest pricing. Discover a wide range of cheap Beautiful: The Carole King Musical tickets, including discount seats or last-minute and low-priced deals, premium seating, center stage, balcony, mezzanine, box seats and orchestra seating too.

Shipping/Delivery Information for Beautiful: The Carole King Musical Tickets:
You can choose either standard or express delivery and you can specify special delivery instructions if necessary. Your theater tickets will be shipped to you using Federal Express.

Also, some Beautiful: The Carole King Musical tickets may be available for immediate download as e-tickets, or electronic tickets, that you can print right from your device.

About Beautiful: The Carole King Musical

Beautiful: The Carole King Musical is a Tony Award winning musical based on the life of Carole King.  The show debuted in September of 2013 at the famous Curran Theatre in San Francisco.

It opened on Broadway, at the Stephen Sondheim Theatre, in January of 2014.  London’s West End welcomed a production at the Aldwych Theatre beginning in February of 2015.

September of 2015 saw the commencement of the U.S. tour.  The first city to collect Beautiful: The Carole King Musical tickets was Providence, Rhode Island.

Beautiful is a jukebox musical.  The majority of the songs were either written or co-written by Carole King.

Some of the Carole King songs you’ll hear in Beautiful include "The Loco-Motion," “Some Kind of Wonderful,” "Take Good Care of My Baby," "Will You Love Me Tomorrow," and "(You Make Me Feel Like) A Natural Woman."

The musical also contains songs written or co-written by King’s real-life friends Barry Mann and Cynthia Weil.  Songs like “On Broadway,” “You’ve Lost That Lovin’ Feeling,” and “We Gotta Get Out of This Place.”

Beautiful is directed by Marc Bruni with choreography by Josh Prince.  The book was penned by Douglas McGrath.

The musical tells the story of King’s professional and romantic life from 1958 to 1971.  The story begins and ends with her playing Carnegie Hall.

Besides King, other important music industry figures portrayed in the musical are Don Kirshner, Neil Sedaka, Little Eva, and The Righteous Brothers.

Beautiful’s strength is its music.  King’s songs, as well as others included in the score, are some of the most popular of the 1960s that weren’t written by British rockers.

Beautiful doesn’t have the greatest book and it doesn’t re-invent the jukebox musical.  Still, it’s 140 minutes of feel-good theatre.

If you’re a slight Carole King fan to a diehard one, you’ll definitely want to procure Beautiful tickets.  If you turn the radio station every time “You’ve Got a Friend” or “It’s Too Late” comes on then you might want to skip this show.

Yes, the real-life Carole King has seen the musical.  She joined the cast on stage (at the curtain call) to sing “You’ve Got A Friend.” 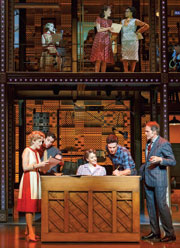