Heavy metal is one of music's most popular genres.  It's a type of music that's played all over the world.  The following list of “The 25 Best Indie Metal Bands” certainly proves that.

Now, we know what you're saying, “there's no way you can pick the 25 best indie metal bands.  There are hundreds of metal bands in the United States alone!”

The following 25 artists have been selected for two reasons.  One, they sound great live.  Two, they have upcoming shows, or are likely to announce tour dates in the very near future.  Meaning, if you live in the right part of the world you'll be able to see these monsters of metal in their natural environment.

Additionally, although not all have released a studio album, all have at least some sort of recording you can enjoy.  Even better, you can enjoy these recordings for free.

Some of the following bands are signed while some are not.  Some are relatively new while others have been around for years.  Some play thrash metal and some play progressive metal.

Really, the only thing the following 25 bands have in common is they all play remarkable and formidable heavy metal music.

A Course of Action

By “no frills” we mean these hard working rockers need nothing but their instruments, amps, and electricity to put on one heck of a live show.  Listen to “Beautiful” for a good sample of what A Course of Action is all about.

These guys will have you banging your head as they whisk you to the Nile Delta.

Oklahoma City, Oklahoma
Angelical Tears blends heavy metal music with classical, Goth, and electronica.  Their sound is like two sounds in one.

Their music is demonic while their vocals are… yes, you guessed it, angelic.  Yet, Angelical Tears puts these two musical contradictions together and makes them work.  Kudos to them. 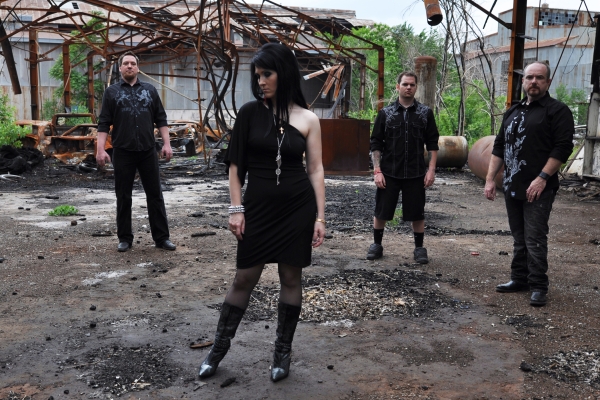 We mentioned their two studio albums, but where Anthology really shines is on the concert stage.

Shayde has a powerful and mesmerizing voice.  The five remaining members of the band play as one and frequently reach maximum head banging velocity.

Santa Cruz, California
Archer Nation showcases the talents and unrelenting drives of guitarist Dylan Rose, bassist David DeSilva, and drummer Keyhan Moini.  They sit on the border of Hard Rockistan and Heavy Metalsville, but who cares about geography.

Archer Nation kills it.  They are super-talented musicians who make a lot of sound for just three dudes from Santa Cruz.

Their polished and accessible sound is due to the efforts of lead vocalist and bassist Emilio Martinez, guitarist Alberto Carballo, guitarist Chris Hayes, and drummer Justin Hayes.

Central/Southern Connecticut
The progressive metal outfit from The Constitution State has toured with such dignitaries as Anthrax, Testament, and Queensryche.

Guitarist Paul Coleman formed the group in 2011 but its current lineup—Coleman, Harry Blackwell (drums), Andrew Purchia (bass), Martin O'Brien (vocals), and Scott Allen Williams (guitars)—coalesced in 2013.  When it comes to heavy metal in Connecticut, As Darkness Dies is the alpha and omega.

Detroit, Michigan
The CrashDollz are lead vocalist Nikki Darling, guitarist Rachel Rekkit, bassist Kevin “Krank” Kekes, and drummer Garrett "Krusher" Brown.  The Crashdollz are trashy, but in a good way.  They are the kind of trashy you want in an elite punk/metal/hard rock band.  They play fast and they play loud.  Their sound is what you might get if Judas Priest had a baby with Motley Crüe and the midwife was The Cramps.  Question: Can you be an indie band if your fans have a nickname?  CrashDolls fans are called “CrashKidz.”

Ann Arbor, Michigan
"If wizards cast spells with guitars it would sound like this” is how Blue Snaggletooth describes their sound.

We agree but we'd like to add that those wizards got a little bit of the blues in their bones.  We swear Blue Snaggletooth just stepped out of a time machine that brought them from the mid-1970s to 2017.

Eden
We went back and forth on whether or not to include Eden's Curse.  They've been around for more than a decade, have released four studio albums, and toured with Dream Theater.

Jönköping, Sweden
The band's founders—guitarists Chris Melin and Jon Mortensen—had a vision to create an innovated metal band that appeals to general music fans as well as hardcore metal heads.

Melin and Mortensen, along with vocalist Marcus Thorell, drummer Axel Janossy, and bassist Agust Ahlberg, have accomplished just that.  To hear the fruit of their heavy metal labors download their self-titled, debut album.

Nashville, Tennessee
Dark Hound is a walking anomaly in more ways than one.  They're from the country music capital of the world but they play heavy metal.  Yet, they don't sound like your average heavy metal band.

No, Dark Hound doesn't have any country music in their sound, but they do have some rock and psychedelia.

If you're looking for some melodic metal then obtain some Dark Hound.  The band's roster is E.T. Brown on vocals, Josh Brown on drums, Evan Hensley on guitar, and Preston Walls on guitar.

Athens, Greece
Ghost Season is a dynamic heavy metal band that works hard to keep the perfect blend of melody and aggression.  Inspired by acts like Shinedown, In Flames, Disturbed, and All That Remains, Ghost Season is able to capture the energy of their live performances in the recording studio.

They are a tight band that relies on their skillful musicianship as much as they do on their top notch songwriter.  Hercules Zotos sings, Nick Christolis plays guitar, Ross L. strikes the drums, and Dorian Gates slaps the bass.  Despite being from Greece, the band sings in English.

Montpellier, France
Hardbanger is the appellation of the heavy metal duo Bruno "Brew" Varea and Jerome "Gray" Graille.  They are highly influenced by 1990's hard-rock and heavy metal.  Some of the bands on our list try to combine heavy metal with beautiful melodies or heavy metal with some other exotic genre.

Hardbanger combines heavy metal with heavier metal.  What they play is pure, one-hundred percent head banging tunes.  It's the type of music you don't take home to mom.

Melbourne, Australia
Billed as Australia's toughest female fronted hard rock band, Heaven The Axe is comprised of singer Phoebe Pinnock, guitarist Steve Watts, guitarist Azza Bok, bassist Tim Miedecke, and drummer Tommy Rossell.  It's a mystery why their web site's background image showcases eight people (Roadies? Hangers on?  Managers?).  What's not a mystery is how fantastic Heaven The Axe sounds in the studio and on stage.  Check out “Good Things Come To Those Who Hate” and you'll be hooked. 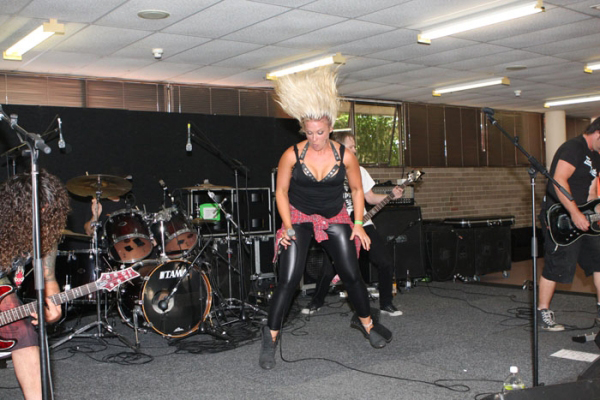 Heaven The Axe at The Summernats Festival in Australia.  Photo courtesy of Eva Rinaldi.

Oh yeah, then there's vocalist Hector Ochoa who can go from growling to screaming to crooning like Chris Cornell.

Inbellum has talent to spare and creativity coming out of their bellums.  We crave their unique mix of heavy metal and reggae and you will too.

State College, Pennsylvania
Do yourself, and It Is Written, a favor and download a couple of their tracks, buy their self-titled debut album, or even better, attend one of their live shows.

In the process, you'll treat yourself to some amazing hardcore metal while helping out three tremendous musicians who are a true D.I.Y. act.

By the way, those three musicians are Ken Hawkins, Darl Johnstonbaugh, and Colin McAtee.

Of course, it doesn't really matter how you describe LCB's din.  What's important is you listen to them.  Start with their song “Peanutbutterjelly.”

Los Angeles, California
Mindwars was founded in 2013 by Mike Alvord and Roby Vitari.  Those names will sound familiar to devout heavy metal fans.  Alvord was in Holy Terror and Vitari was in Jester Beast.  They first met in 1988 and then reunited 25 years later to bring back 1980s speed and thrash metal.

They are joined by Danny “Z” Pizzi on bass.  So, do we really need more speed and thrash metal from the 1980s?  The answer to that question is “of course we do!”

Toledo, Ohio
Mobile Death Camp is one of those bands whose name says it all.  No one has to tell you that Mobile Death Camp plays thrash and speed metal.  You glean that from their awesome epithet.  Speaking of “awesome,” MDC is just that on stage.

They play fast, hard, and snug.  They are also awesome to their fans.  On their homepage they thank all their supporters: “We're sh*t without you guys.”  That's why it's easy to root for Todd Evans, Chad Smith, and J.C. Chino.

Columbia, South Carolina
Osara is inspired by bands like Alter Bridge, Avenged Sevenfold, and Of Mice & Men.  They just released their first EP.

To stay in top form, and hone their sound, Osara will play gigs as a cover band.  Basically, they just love playing music together.

Warsaw, Poland
They may hail from Poland but they've signed with an American label.  Meaning, in the near future you may see their name on the marquee at your favorite heavy metal haunt.

If you do, make sure you're there!  Sebastian, Michał, Dawid, and Jasiek know how to get it done on the concert stage.

They say their influenced by Iron Maiden, Judas Priest, and DIO (among others).  You can hear a little of each of those bands in their sound. 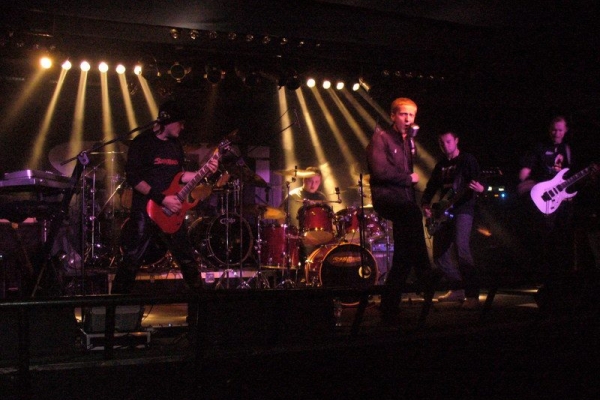 Houston, Texas
Six Minute Century formed in 2004 and in 2008 their dream came true when they signed to Nightmare Records.  Their debut album, Time Capsules, dropped later in 2008.  Six Minute Century are an outstanding power-slash-progressive metal quartet.

These guys play in unison and LaFon's guitar work is impressive.  If you're in the Houston area you've got to see these guys perform live.

Whatever they do musically they always remain true to their heavy metal roots.

Possessing one of the best names on our list, Soulbleed is inspired by the likes of Fear Factory, Prong, Static-X, and All That Remains.

Their sound is similar to the thrash your parents grew up listening to but with a healthy dose of 21st century angst and aggression.