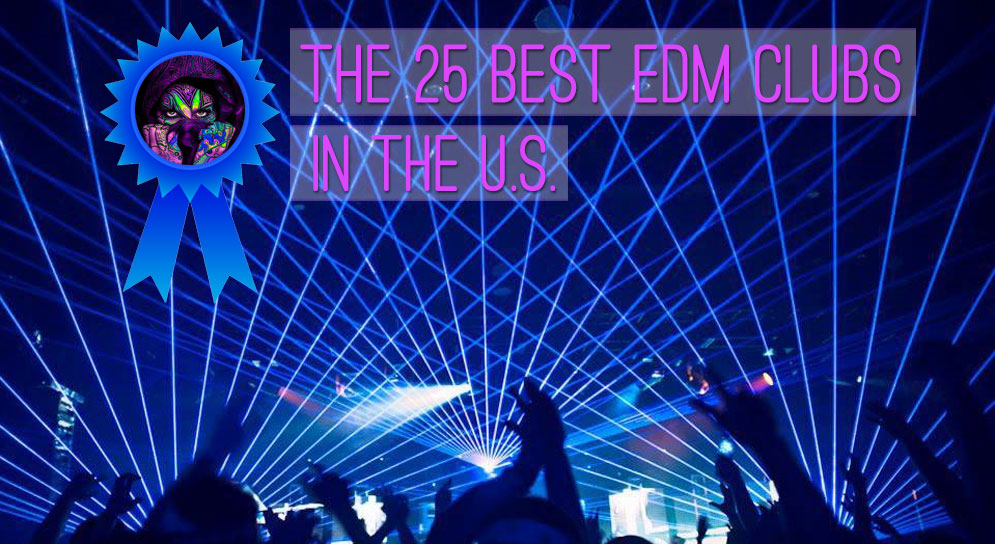 
Keep calm and wait for the drop! Electronic dance music, or EDM, is the next big thing in popular music.  It has exploded in popularity over the past two decades.

There’s a lot of electronic dance music out there, but to experience it the way it was meant to be experienced, you have to go to a nightclub.  Not just any nightclub, but one with a great sound system, professional production elements, and at least one full bar.

Below, is a list of the 25 best EDM clubs in the United States.  Each of the following venues has the three qualities listed above as well as a passion for EDM.

It’s their passion that has landed them on our rundown.  If you’re a fan of EDM then you’ve got to visit these clubs.

San Francisco, California
San Francisco’s 1015 Folsom has some impressive stats.  Its 20,000 square feet is spread over five rooms—each of the five rooms has a full bar and a DJ booth.  The club can accommodate 2,000 EDM fanatics.  Each of whom can enjoy a 400-square-foot water wall replete with video and a 30-foot tall Moroccan mezzanine.  The venue’s sound system can produce a soul-stirring 150,000 watts of electronic music. 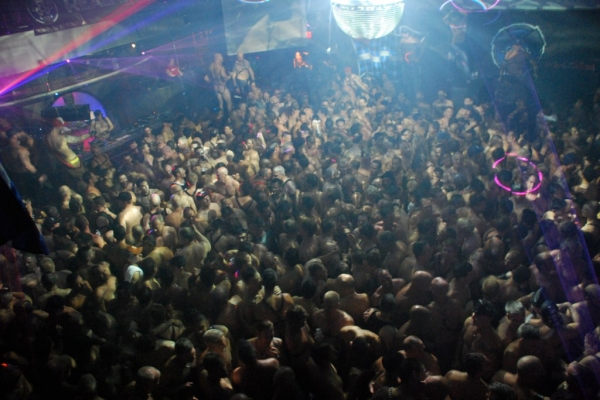 Hollywood, California
Avalon Hollywood started in 2002.  It’s building, positioned on Hollywood and Vine, finished construction in 1927.  In 1964, it hosted a performance by The Beatles.  Today, it hosts DJs like Paul Oakenfold, Sweater Beats, Chuckie, and Boombox Cartel.  As the name suggests, this awesome EDM venue is classy and stylish.  Don’t try to mosh and don’t dress like you came directly from the beach. 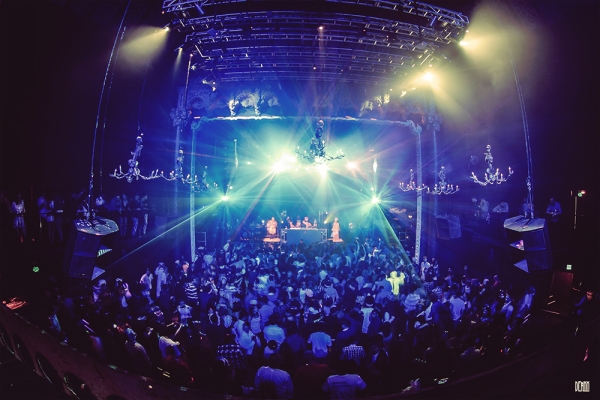 Cleveland, Ohio
The Barley House is located in Cleveland’s Warehouse District and it’s the place to go in C-Town for EDM.  At the time of writing this article, Barley House was getting ready to hosts such luminaries as Nugget, Kidd Genius, EV, Kosher Kuts, and Digital Dave.  During the day, Barley House is a great place to grab a bite and enjoy a libation or two.

Denver, Colorado
Beta Night Club’s slogan is “Club Culture Evolving.”  That means Beta is always striving to improve their patrons’ experiences.  Contrary to this slogan is Beta’s constant commitment to the deejay.  The club’s lights, stage effects, and sound system are all designed to make the deejay happy.  If the deejay is happy then the place will be rocking.  Beta is also environmentally friendly.  If you want to party green you’ve got to go to Beta.

Detroit, Michigan
Bleu bills itself as the only world class nightclub in Detroit.  Located on Woodward Avenue, Bleu brings EDM acts like Christian Martin, Al Neon, and Party Thieves to Detroit Rock City.  Is this joint called “bleu” because the insides are all painted blue?  Not really, but they are fond of blue gels over their stage lights. 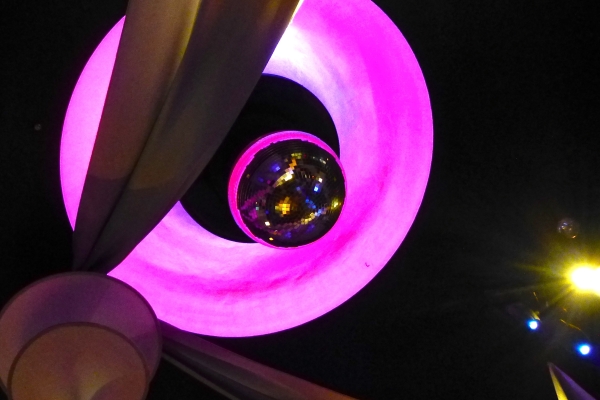 The glitter ball at Bleu from 2013.  Image courtesy of Deb Nystrom.

San Francisco, California
Do you know what a “mashup” is?  It’s when a deejay takes two different songs and mashes them together to create an entirely new track.  When it started in 2003, “Bootie” was the first nightclub promotion dedicated to this unique art form.  Now, there are lots of nightclub promotions so why is Bootie on our list, especially when it’s not a nightclub but a club night? One, who doesn’t love a good mashup!  And two, Bootie performs all over the world.   That means there’s a chance they may come to your neck of the woods and we don’t want you to miss them.  If you can’t wait for a visit, their home base is San Francisco.  In particular, the DNA Lounge on 11th Street (every Saturday night). 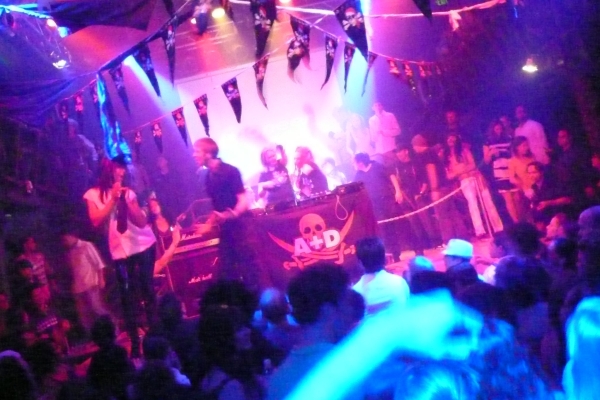 The Bootie at the DNA Lounge in San Francisco.  Image courtesy of Morgan Sherwood.

New York City
Bounce is a 4,000-square-foot sports bar stationed on West 21st in Flatiron.   Come to watch the game on one of their 30 HDTVs, and then later that night, assuming it’s the weekend, stay to experience top EDM DJs like Roberto Flay, Regg Ruck, and Dalton.  Bounce combines sports and EMD but does so with aplomb.  Bounce is cool like Joe DiMaggio or Derek Jeter.

New York City
Cielo Club is for hardcore EDM fans.  Located in the Meat Packing District, and the brainchild of legendary DJ Nicolas Matar, Cielo Club is all about the music.  Matar and his staff purposely avoid being the biggest club and they eschew signs of elitism (once inside there are no red ropes).  Their focus is on booking world class DJs, state of the art sound system, a strong door, and great service. 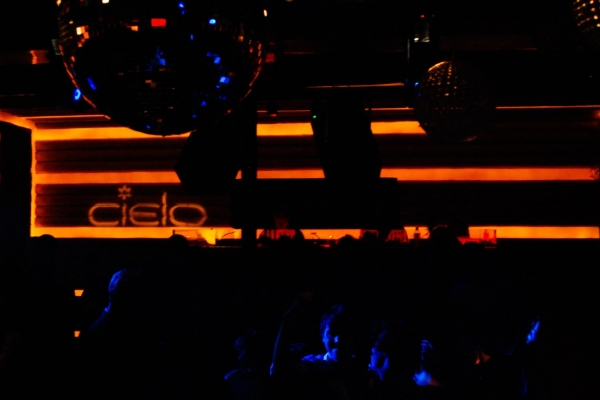 Miami, Florida
Club Space is in its second location and working on its second decade of operation.  Don’t assume that since the club is old it’s not the place to go for great EDM music because it is the place to go.  Club Space knows what they’re doing.  Over the years, they’ve welcomed such EDM icons as Paul Van Dyk, Sasha, John Digweed, Deep Dish, and Tiesto.  Some have performed sets of more than ten hours. 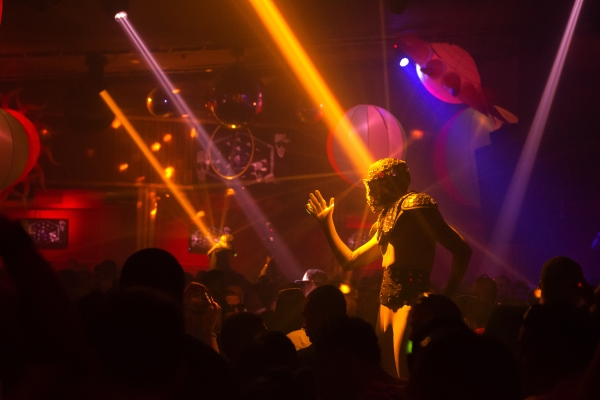 Washington, D.C.
Although it opened in September of 2012, Echostage is one of the premiere EDM clubs on the planet.  Tale of the tape lists the venue at 30,000 square feet.  Audio wise, Echostage sports a German-imported D&B Audiotechnik V series sound system.  Other amenities include two 60-foot-bars, unobstructed sightlines and sets from DJs like David Guetta, Avicii, and Calvin Harris. 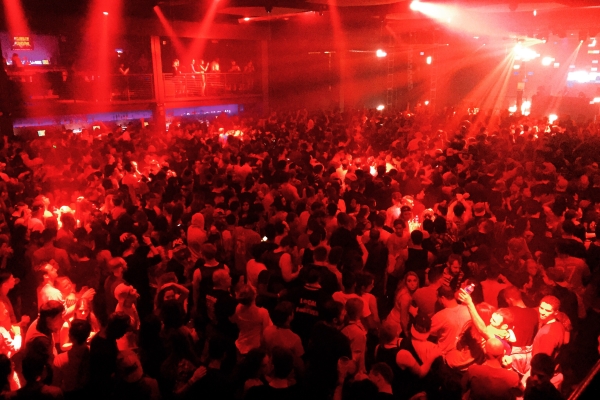 Los Angeles, California
Exchange LA, where part of the movie The Social Network was filmed, is an award-winning nightclub and one of the city’s premiere party spots.  Located in the former Los Angeles Stock Exchange Building, this chic nightclub welcomes patrons through a pair of 12-foot-high bronze doors.  Inside, you’ll find a Funktion One Resolution III sound system, smart lighting, and a 200-square-foot LED screen display. 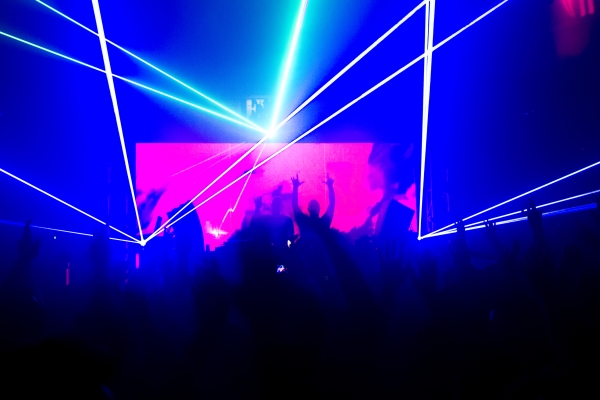 Seattle, Washington
Seattle’s Foundation Nightclub has won several awards and received numerous accolades.  Surely, their proudest moment came in 2015 when they were awarded “Best Bathrooms.”  The Foundation is an all-EDM nightclub.  They sport a pristine audio setup, an attentive staff, and three full bars.  This luxurious club has also partnered with Uber.  Checkout the nightclub’s website for more information on how to get free rides to and from the club. 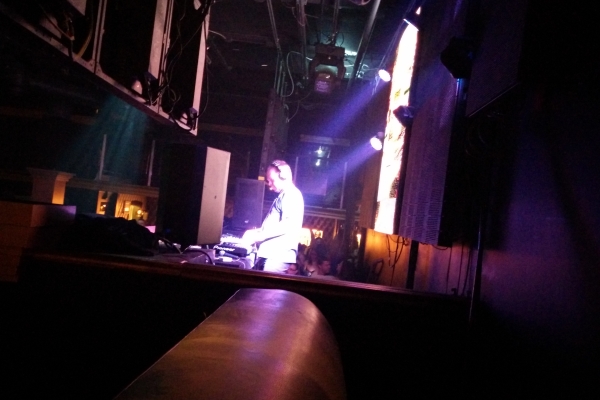 Phoenix, Arizona
Adjacent to a 12-lane bowling alley, Gypsy Bar not only caters to EDM fans’ ears, but also their taste buds—they have a full dinner menu.  When you’re tired of dancing you can recharge your batteries in their game lounge—they even have reward cards.  As for their dance floor, it’s surrounded by a raised DJ booth, confetti cannons, CO2 blasts, snow machines, and hazer machines.

Las Vegas, Nevada
Hakkasan is routinely rated as one of the top EDM clubs in the world!  Found inside the MGM Grand Hotel, Hakkasan is the place to go for gastronomical and EDM treats.  The first two floors are the restaurant.  The third floor is the lounge and the “Ling Ling Club.”  The fourth and fifth floors are the nightclub.  All this summer, world renowned DJ Tiësto is performing a residency show at Hakkasan. 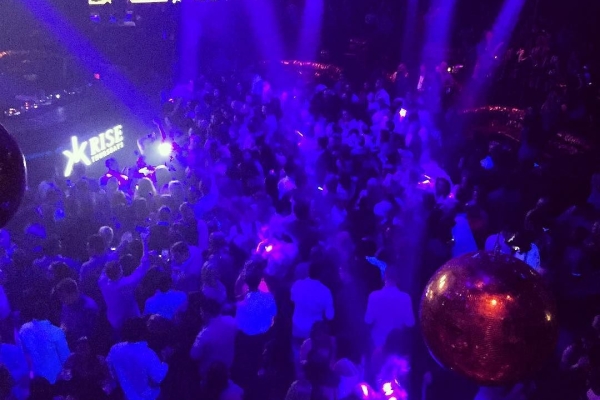 Austin, Texas
Highland is a gay lounge and nightclub that boasts Austin’s warehouse district’s biggest dance floor.  The venue is open Thursday, Friday, and Sunday until 2am.  On Saturdays, it’s open until 3am.  Their bar comes highly recommended and their sound system is top of the line.  If you want to experience some EDM in a sophisticated, but uproarious setting, the Highland is your gig.

Miami Beach, Florida
LIV is a nightclub found at the Fontainebleau Hotel & Resort in Miami Beach, Florida.  Fontainebleau is the historic part.  LIV is the modern part.  The insides of this EDM club are simply jaw dropping.  It’s like a paint store exploded inside Lady Gaga’s bonus room.  Visit LIV to hear thumping electronic dance music and to catch a glimpse or two of some A-list celebrities.

Chicago, Illinois
The Mid is cozy.  It can accommodate just one and eight hundred EDM fans.  Nonetheless, it has three bars, a good-sized dance floor, table seating, a VIP room, and a second floor balcony.  The Mid has welcomed DJs like Paul Oakenfold, Prince Fox, and Tommy Trash to its booth.  You’ll find The Mid at 306 North Halsted in the West Loop.

New Orleans, Louisiana
Republic NOLA is an egalitarian music venue, but when it hosts EDM DJs, it turns into one of the hottest nightclubs in the south.  This venue is one of those rare spaces that are both sophisticated and approachable.  Some of the DJs Republic has brought to the Big Easy include Getter, Borgeous, and Boombox Cartel.

Chicago, Illinois
ROOF on theWit has been called one of the best three rooftop lounges in world.  That’s pretty impressive.  Their reputation is built on the fact that the nightclub is perched 27 floors into the sky.  The only thing more awe-inspiring than the EDM spun by the Roof’s cadre of DJs, is its view.  You can see a lot of Chicago when you’re up there.

Costa Mesa, California
Paul Oakenfold, Mickey Avalon, LMFAO, BlasterJaxx, and Far East Movement are just some of the EDM acts that have performed at Sutra.  This illustrious nightclub started in 2003 and since then has become the place to party in Orange County.  Nationally known, Sutra sets itself apart from other EDM clubs by being interactive.  That’s why no one ever goes to Sutra just once.  They go multiple times. 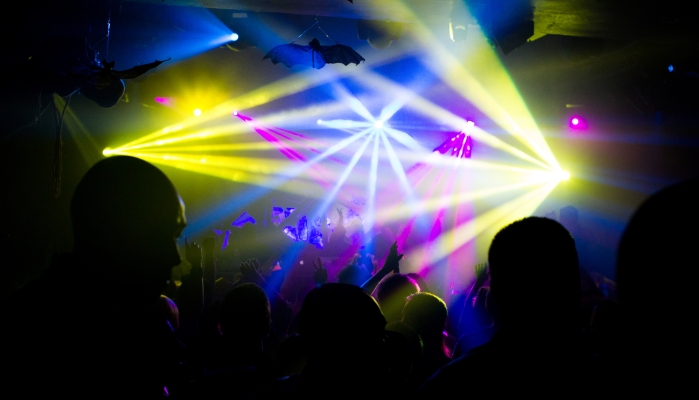 San Francisco, California
Temple Nightclub in San Francisco is rocking a Void sound system.  It also dazzles patrons with 50,000 addressable, floor-to-ceiling LED bulbs.  The dance floor is surrounded by seven VIP booths while sitting under four hovering mezzanine tables.  If the main room isn’t your scene, you can always venture downstairs to LVL 55.  It’s smaller than its main floor sibling but comes with its own DJ booth and an underground feel—“underground” as in “independent” not subterranean (although it’s that too).

Atlanta, Georgia
A fixture of Buckhead since 1994, Tongue and Groove is on its second building.  Currently, the sophisticated and debonair nightclub is occupying 8,600 square feet in the Lindbergh City Center.  The reason why this club has been around for more than two decades is simple: it’s constantly changing.  This includes the music the DJs play, its dress code, its face-melting sound system, and its mind blowing production elements.

Las Vegas, Nevada
Las Vegas is the capital of EDM in America.  That makes the XS Nightclub the oval office of EDM.  Part of the Wynn Las Vegas Resort, the XS Nightclub is the epitome of opulence.  It was designed after the curves of the human body.  Despite all that, the club still has a tangible passion for EDM.  You can feel it.  You can also see it as there are 10,000 individual light sources within XS.  Get this: for Memorial Day weekend the club booked Zedd, Kaskade, David Guetta, Skrillex, and Diplo.  Now, that’s a lineup.

CODA
If you’re going to one of these nightclubs for the first time make sure you visit their website.  As we tried to point out, not all of the aforementioned 25 venues host EDM acts all the time.  Also, a few of these clubs are only open a handful of hours a week.  You want to make sure the nightclub is actually open and hosting EDM acts when you want to go.

If you’ve never been to a nightclub before then you should definitely check out the venue’s website.  Most nightclubs have dress codes (you just can’t show up wearing whatever you want like you can at a rave) and some only accept cash.

Regardless if you’re a veteran or a rookie, please be safe and smart.  Only attend a nightclub with people you trust, know your limits, and never drink anything you didn’t order.  We know we speak for all EDM clubs when we say we want you to have a great time and we want you to come back.