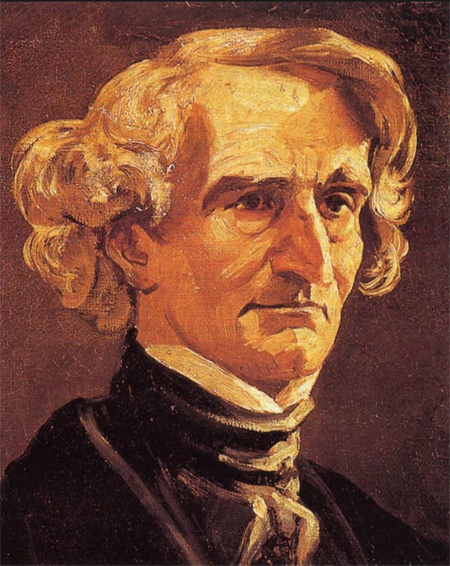 Crop of the original painting, which was formerly attributed to
Honoré Daumier [Public domain], via Wikimedia Commons

The Romantic composer commonly known as Hector Berlioz was born in La Cote-Saint-Andre on December 11, 1803.

You might be familiar with those compositions, but what about the artist himself?

During his youth, France was actually at war and the school system had been disrupted. Berlioz thus received his education from his physician father.

He was quite lucky that his father was well-educated and cultured—his father would give him his first music and Latin lessons.

Berlioz received very little formal musical training and the rest, he would figure out by himself.

At age 12, he was already composing music for chamber-music groups! He would also learn how to play the flute and the guitar, eventually mastering the later.

At the age of 18, he was sent to Paris to learn medicine. For a year, he stuck with the plan and obtained a science degree.

He would often go to the Paris-Opera and studied the repertory.

He grew so passionate about music that he went on to study under Paris Conservatoire composition professor Jean-Francois Lesueur despite his parents’ disapproval.

In 1830, he would take home the Prix de Rome award, which would reassure his parents about his career choice. In the same year, he would finish the Symphonie fantastique.

While in Paris, he would come to admire the works of Beethoven, Goethe, Shakespeare, and Veber. From afar, he would also fall in love with a Shakespearean actress called Harriet Smithson. He would later be engaged to pianist Camille Moke.

At the time, he wanted to challenge the musical conventions. According to him, music should be dramatic and expressive.

The prize required him to go abroad for several years. He would spend two years in Italy, where he would meet Mikhail Glinka and befriend Mendelssohn.

He would also go to the hills and play music for peasants and bandits, an experience that would serve as inspiration for his future works.

Only 18 months into his stay, he would decide to head back to Rome and forfeit the prize.

In Paris, he would restart his career with Le Retour à la vie. He would later meet and marry Harriet Smithson, though it would not last. The couple had a child named Louis and lived together at Montmartre, where they would often be visited by other artists.

Berlioz would also compose many works in their house there.

During the premiere of Harold en Italie, violinist Paganini would praise his genius.

The following day, Berlioz received a great sum of money and a letter from Paganini. This gave him greater freedom to work and eventually came up with Romeo et Juliette. He aptly dedicated it to the violin virtuoso.

The artist would produce grandiose orchestral writing, which would prompt ridicule and skepticism from his countrymen. His reputation would never recover in France, but he would experience more success abroad.

Sadly, he would have no following whatsoever despite the fact that fellow musicians enjoyed and admired his works.

The talented composer would think that he was a failure.

He would undergo depression from career dissatisfaction, an unhappy marriage, and the death of his only child.