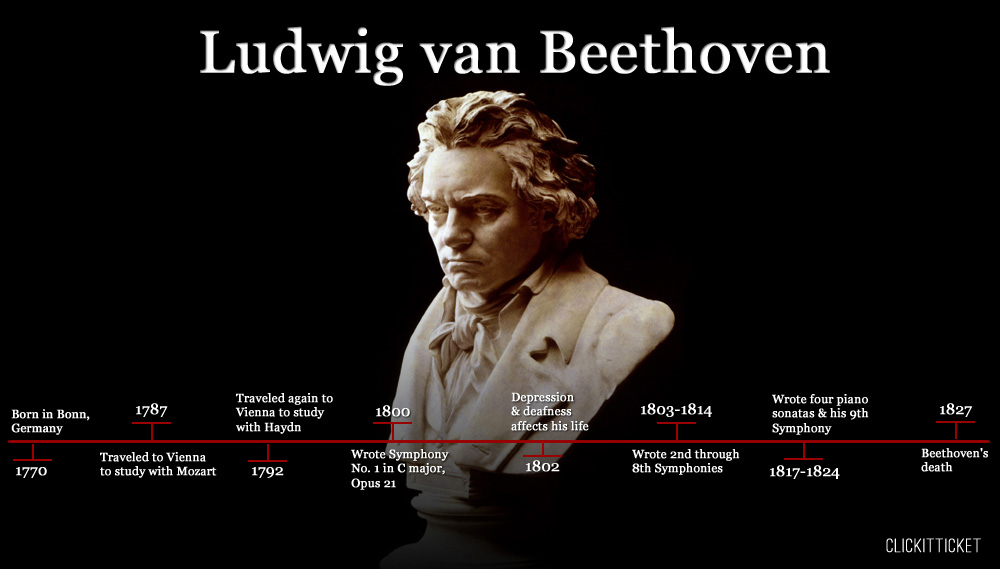 Ludwig van Beethoven is one of the few viable candidates for the honorific of humanity’s greatest composer.

Even musicologists that disagree with that statement likely have Beethoven in their top two, or at worse, their top three.

While Mozart expanded our imagination with an otherworldly talent, Beethoven epitomized the human qualities of dedication, hard work, and force of will.

Beethoven was the ideal Romantic artist and a composer of supreme creativity.

His works revolutionized the musical conventions of his time.  After his time, his compositions proved to be an endless font of inspiration and influence.

If aliens landed on Earth, and asked to hear an example of “music,” you’d likely play them the last movement of Beethoven’s Ninth Symphony. 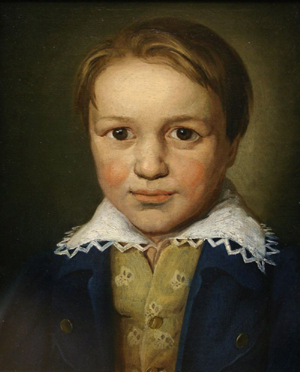 A portrait of the 13-year-old Beethoven by an unknown
Bonn master (c. 1783) courtesy of Wikipedia

Ludwig van Beethoven was baptized on Dec. 17, 1770 in Bonn.  Today, Bonn is in Germany.  At the time of Beethoven’s birth, the city was part of the Holy Roman Empire.

The exact date of Beethoven’s birth is unknown.  Scholars believe he entered the world on Dec. 16.

It was customary for Christian children of his era to be baptized the day after their birth.  Also, his family celebrated his birthday on the Dec. 16.

Of the seven children born to Beethoven’s parents, only three survived—all boys.  Beethoven was the oldest.

Beethoven displayed a talent for music at a very early age.  His father, in the tradition of Mozart’s father, billed his son as a child prodigy.

In 1783, Beethoven celebrated his first published composition, a collection of keyboard variations.

The following year, his teacher, Christian Gottlob Neefe, wrote in the Magazine of Music: “If [Beethoven] continues like this, he will be, without a doubt, the new Mozart.”

In 1787, Beethoven left Bonn for Vienna.  He visited the city to meet Mozart and become his student.  Scholars are unsure if the two musical behemoths met.

Beethoven’s stay in Vienna was short.  He returned home upon learning that his mother was suffering from a grave illness.

His mother died shortly thereafter, and his father slipped further into alcoholism.

These events forced Beethoven to care for his two younger brothers.

Beethoven may have never met Mozart, but he did meet Joseph Haydn.

With Haydn, Beethoven study the concept of counterpoint.

Beethoven wanted more attention from Haydn then he was willing to give.  Therefore, Beethoven turned to Johann Albrechtsberger.

Albrechtsberger was an involved teacher but unimpressed by the young composer.  He told a colleague that “[Beethoven] has learnt nothing, and will never do anything in decent style.” 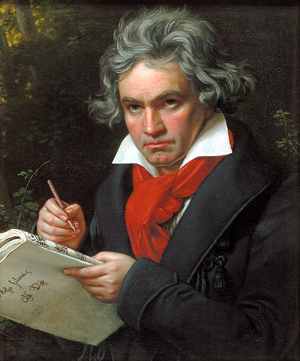 Despite the heartache, Beethoven continued to study music.

In the early 1790s, while living in Vienna, he focused on performing instead of composition.

The master’s First Symphony was initially performed on April 2, 1800.

At this time, his pair of symphonies were enough to have his name mentioned in the same breath as Mozart and Haydn.

Around 1803, Beethoven announced that he was unhappy with his work and wished to go in a new, bolder direction.

The first major composition of this new era was his Third Symphony, also known as Eroica.  The opus premiered in 1805.

His Fourth Symphony was first performed in 1807.  Both his Fifth and Sixth Symphonies debuted in 1808.

The second decade of the 19th century saw Beethoven struggle will illness and the death of his brother, Kaspar.

His brother’s death also embroiled Beethoven in a lengthy legal battle over custody of his nephew, Karl.  Beethoven was finally awarded sole custody in 1820.

Beethoven was hard on Karl.  The latter attempted suicide in July of 1826.  The two reconciled but saw each other for the last time in January of 1827.

Beethoven’s most famous work, his Ninth Symphony, was first performed on May 7, 1824.

The opus was well received but so expensive to produce that he made little money.

In the mid-1820s, Beethoven’s health diminished again.  Yet, he still managed to compose innovated and challenging works in the form of string quartets.

These late works were not well received by his contemporaries but are now considered masterpieces.

The composer left this mortal coil during a thunderstorm.  Witnesses claim he slipped into the great beyond at the precise moment thunder cracked the sky.
An autopsy revealed Beethoven suffered from severe liver damage likely brought on by heavy drinking.

Despite those findings there are many theories on Beethoven’s cause of death.  Those theories include alcoholic cirrhosis, infectious hepatitis, syphilis, and Whipple's disease.
One of the more interesting theories is Beethoven died of lead poisoning.

The poisoning wasn’t malicious but from doctor-administered treatments designed to make him feel better. 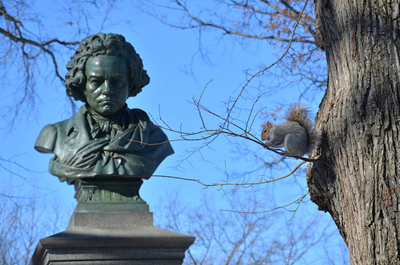 A bust of Beethoven in Central Park, NYC 2012

The cause of Beethoven’s infamous deafness also has many theories.  The composer claimed it was a result of a fit he suffered in 1798.

Other theories include an auto-immune disorder, a distended inner ear, and typhus.

Some think it was caused by the composer’s tendency to dunk his head into a vat of cold water.  Beethoven did this to stay awake.

His final concert performance came in 1811 (although he did help conduct his Ninth Symphony in 1824).

By 1814, he was nearly completely death.  When his Ninth Symphony debuted in 1824, he couldn’t hear the audience showering his work with applause.

Gradually losing his hearing was difficult for Beethoven.  To make matters worse, he also suffered from tinnitus.  His struggles with hearing loss caused him to contemplate suicide.

One benefit of his deafness, if we may use such an insensitive term, were his conversation books.

Beethoven and his friends wrote on the blank pages of these books to effectively communicate.

Although many of the 400 conversation books were destroyed, the remaining tablets give researchers insights into Beethoven’s views on music, composition, and art.

Thanks to a below-average 1994 film, Beethoven’s “Immortal Beloved” is one of the best-known facets of his life.

In 1812, Beethoven wrote a love letter to an unknown woman he called “Immortal Beloved.”  The 10-page note was never sent.

For decades, scholars have debated the identity of this woman.  The main candidates are Antonie Brentano, Josephine Brunsvik, Therese Brunsvik, and Julie Guicciardi.

Beethoven had the unfortunate habit of falling in love with aristocratic women.  His feelings were often reciprocated, but as a “commoner” marrying them would have been scandalous.

As you might expect from a genius, Beethoven could be difficult, moody, and irritable.  Furthermore, he didn’t care for authority, etiquette, or social status.

He demanded quiet from his audience, and if he didn’t get it, he would abandon his concert.  He refused to perform at parties and social gatherings when informally asked to do so.

Even so, he had a close circle of devoted friends that deeply cared for him.  His funeral procession was attended by thousands.

Musicologists generally categorize Beethoven’s music into three periods.  These periods have the “creative” names of early, middle, and late.

The middle period spans from 1803 to 1814.  Obviously, the “early” period precedes it and the “late” period follows.

The early period was influenced by Mozart and Haydn.

The late period, punctuated by his Ninth Symphony, is characterized by innovation and intellect. 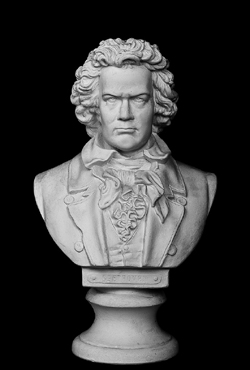 Beethoven originally dedicated his Third Symphony to Napoleon Bonaparte.  When he heard that Bonaparte had declared himself emperor, he tore the dedication page from the manuscript, ripped it in half, and threw it to the floor.

While that story has persisted, there was also a practical reason for altering the dedication.

The work was commissioned by Prince Joseph Franz Maximilian Lobkowitz.

Certainly, Beethoven disliked Bonaparte’s ambition, but it’s also likely that he wanted to please his benefactor and get paid.

Patrons played a big role in the Beethoven’s life, especially early in his career.

At various times, Beethoven’s brothers served as business managers.  Both were quite successful in the role.