Leave it to Major League Baseball. Not only do they keep track of pitch speeds, they also keep track of how fast pitches appear to batters.

They don’t always call it “pitch speed,” although they measure it in miles per hour. Baseball’s number crunchers generally call it “velocity” and how fast a pitch seems to the hitter is referred to as “perceived velocity.”

Here are each team's average and perceived average pitching velocities in graph form: 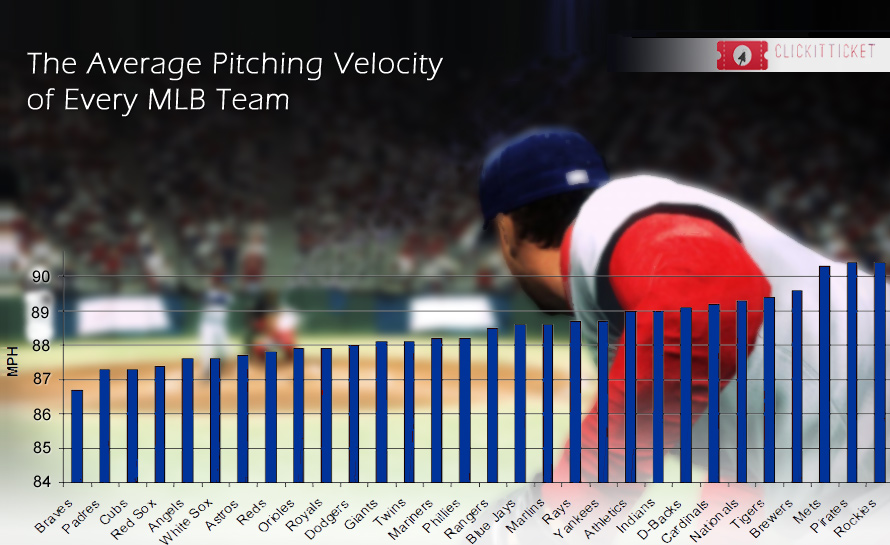 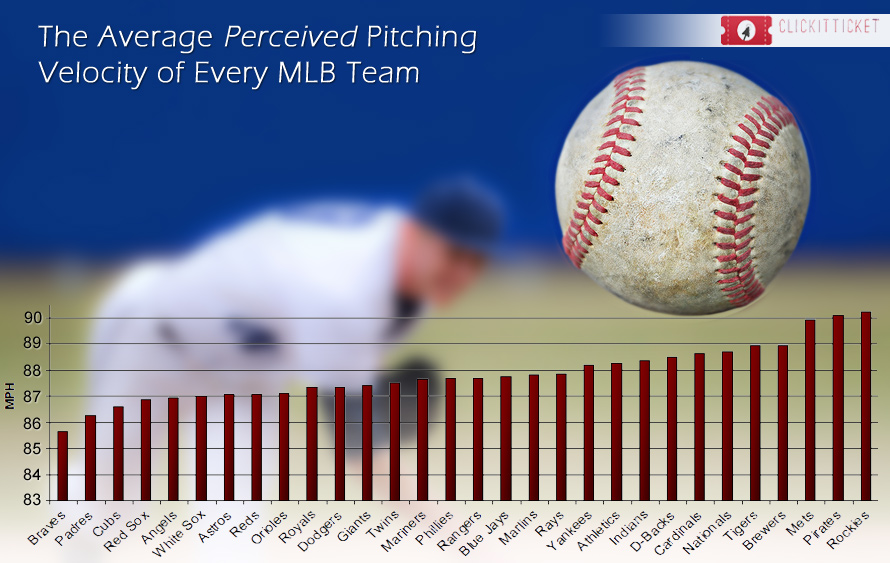 It sounds like a Vin Diesel movie, but perceived velocity considers where a pitcher releases the ball. A pitcher must start his windup on the rubber, which is sixty feet, six-inches from home plate, but that’s not necessarily how far the ball travels.

One pitcher may release the ball six feet from the rubber while another let’s it go at seven. The ball will reach the batter in less time when released closer to the plate and thus appear to the batter to be traveling with more rapidity.

The stat for where pitchers release the ball is called “extension.”

When you’re dealing with fastballs traveling at, or near, 100 miles per hour, I’d think a foot or two wouldn’t matter. Heat is heat.

It must matter or baseball nerds wouldn’t have it as a stat. Besides, when you’re making millions of dollars hitting a baseball, you can probably discern when the ball is missing a stitch not to mention traveling 12 fewer inches to the plate.

My all-time favorite pitcher, Greg Maddux, was never known for his fastball. He finished his career lucky to hit 87 MPH on the radar gun, but he won 355 games and was elected to the Baseball Hall of Fame in his first year of eligibility.

There is, however, something that fascinates us about pitch speeds, something primal.

In Little League, when you returned to the dugout after seeing a new pitcher, your teammates didn’t ask about movement or break. They asked how hard he or she threw.

So far, in 2017, the pitchers most associated with heat are New York Yankees closer Aroldis Chapman and St. Louis Cardinals right-hander Trevor Rosenthal.

Rosenthal has the second-highest average velocity at 97 MPH. Chapman is third at 96.2 MPH.

Number one is Tampa Bay Rays righty Ryne Stanek. He has an average velocity of 99.3 MPH, but has only thrown nine pitches (all but one was 99 MPH).

Chapman’s higher (albeit slightly) perceived velocity might be due to his height.  He’s six-foot, four inches while Rosenthal is six-foot, two inches.

In both average velocity and average perceived velocity, the Rockies are followed by the New York Mets and Pittsburgh Pirates.

Fast fastballs are one thing, but what we really want to know is the team with the slowest average velocity. Perhaps channeling Greg Maddux, the Atlanta Braves lay claim to the Majors slowest pitching staff.

The Braves average velocity is 86.7 MPH. Their pitching staff throws the ball five percent slower than the Rockies.

Rounding out the bottom three for average velocity are the San Diego Padres (87.3 MPH) and your world champion Chicago Cubs (87.3 MPH).

For average perceived velocity, the Braves slow down by more than a mile per hour, 85.66 MPH.  Once again, the Padres are in second place at 86.26 MPH, but Joe Kelly’s Red Sox lumber into third at 86.60 MPH.

Does velocity, or perceive velocity, equal winning? Surely, teams with flame throwers are heating up their divisions.

At the time of writing this article, the three teams with the highest velocities—Rockies, Pirates, and Mets—are first, last, and smack-dab-in-the-middle of their respective divisions.

Of the four teams with the slowest velocities—Braves, Padres, Cubs, and Red Sox—half own losing records.

Three of the top four teams in terms of winning percentage—New York Yankees, Washington Nationals, and Rockies—are within the top ten of average velocity and average perceived velocity.

The Los Angeles Dodgers and Astros, who are one and two, respectively, in the league in ERA and WHIP, are in the bottom twelve in both average velocity and perceived velocity.

If you average all of the above team pitching velocity averages, it comes out to 88. So the average pitching velocity in the MLB at the beginning of the 2017 season is 88 MPH, which is why we added that particular number to the speed gun in the header image above.

The Best Sports Bars in Canada