My friend and I went to Roger Waters performing The Wall live at Madison Square Garden and Roger was nice enough to allow picture-taking, as long as we didn't use a flash. That, along with a less-than-steady-hand and an average camera, explains why many of these photos could have been a little better quality. Regardless, you will get a great idea what the show was like. And believe me, it was awesome! 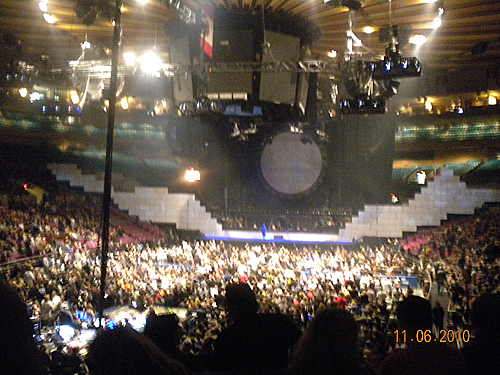 This is what the stage looked like when we walked in. As you can see, the soon-to-be-built wall extends across the whole arena. 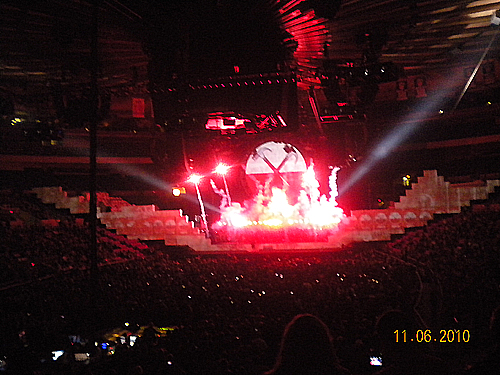 As the band plays In The Flesh, there are amazing pyrotechnics. 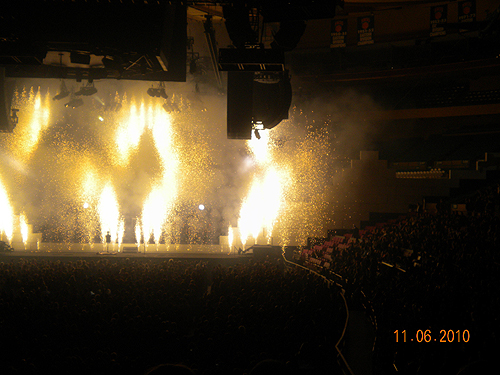 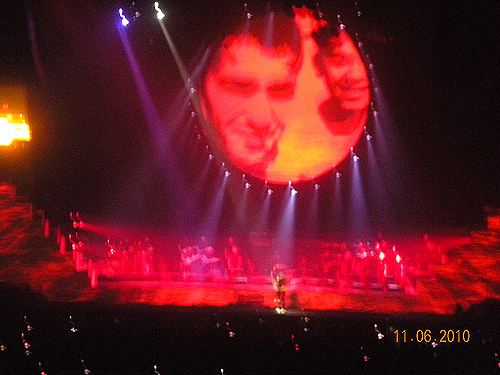 A blurry shot of Roger playing the bass on The Thin Ice. I think that's a picture of his parents. 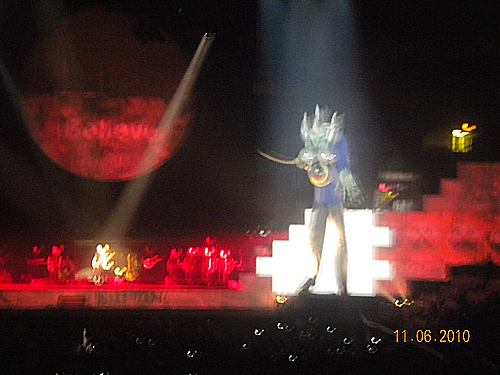 This is so cool. As the band plays Another Brick in the Wall, a gigantic moving marionette caricature of a nasty teacher. 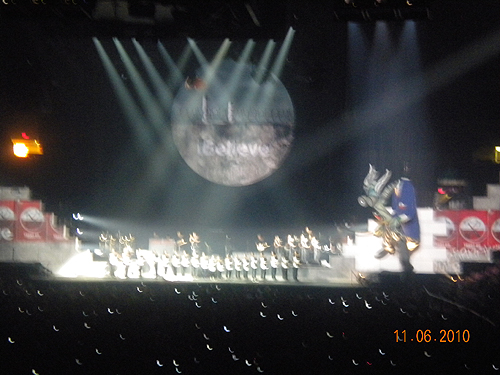 Then a big group of kids from a local grade school come out and dance along while pointing at the massive marionette: "Teacher, leave us kids alone!" 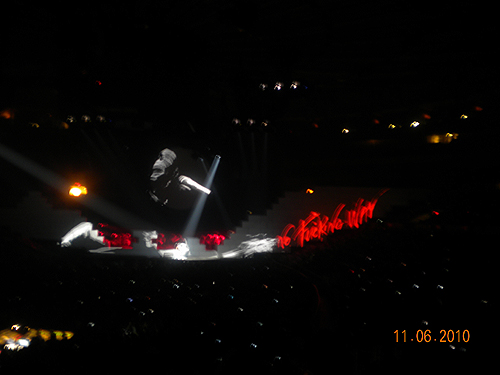 Another neat thing Waters did. He played a video of him singing Mother 30 years ago live when he first performed The Wall, and he sang along with it. Sorry for it being so blurry, but you can see the microphone in the center circle. On the right you can see that it says 'No Fucking Way'. That was in response to the lyric '"Mother should I trust the government?" The crowd went wild at this. Also notice that the Wall is a little more built now. The band is playing behind the Wall. 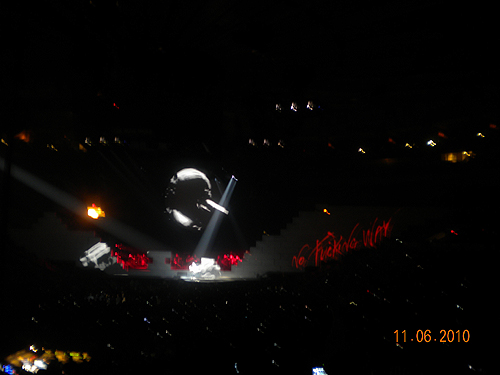 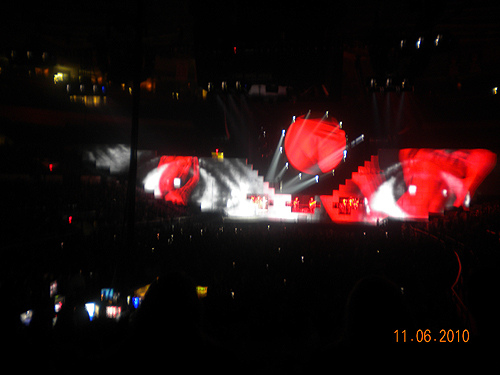 Now the Wall is almost complete. This is during Young Lust. 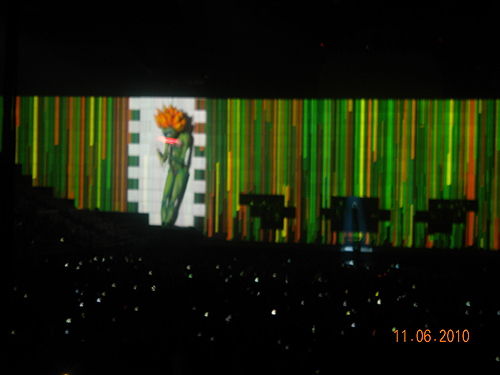 Another huge marionette, it is an evil caricature of his wife, with glowing red lips. See Roger in the center hole in the Wall to the right of the marionette, the little tiny guy with a slight spotlight on him? This is during Don't Leave Me Now. 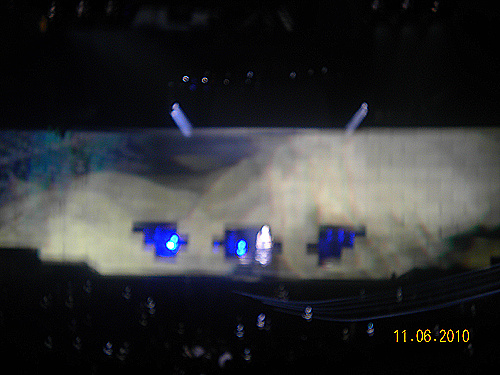 Hard to see, but this is during Goodbye Cruel World, as the final bricks are put in place and Roger disappears. 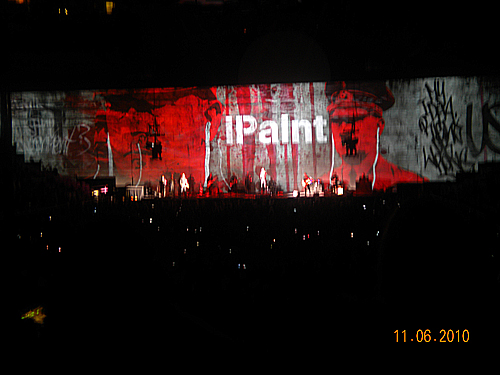 Now the band plays out in front of the Wall and graphics and video are projected onto the massive Wall. It is unbelievable. This is a montage of iPod take-offs. Everything from iPay to iProfit (see below). At one point there are planes flying across the Wall dropping red crosses as if they were bombs. Then the planes drop Shell Oil logos and Mercedes Benz logos. Roger obviously has a serious distaste for large corporations. I think this is during You Better Run. 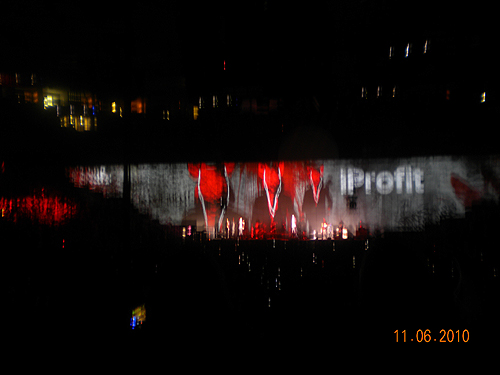 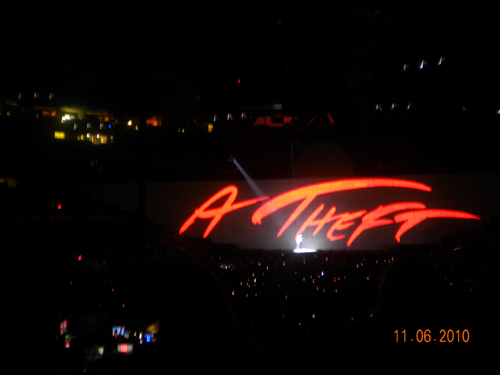 This is part of a line that reads: Every gun that is made, every warship launched, every rocket fired, represents, in the final analysis, a theft from those who hunger and are not fed, who are cold and are not clothed. This world in arms is not spending money alone. It is spending the sweat of its laborers, the genius of its scientists, the hopes of its children. - Dwight D. Eisenhower 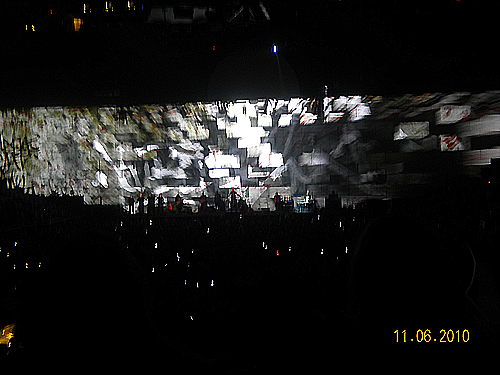 The Wall disintegrating before our very eyes. Mind-blowing. 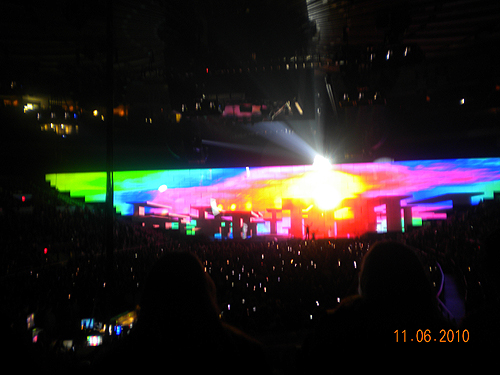 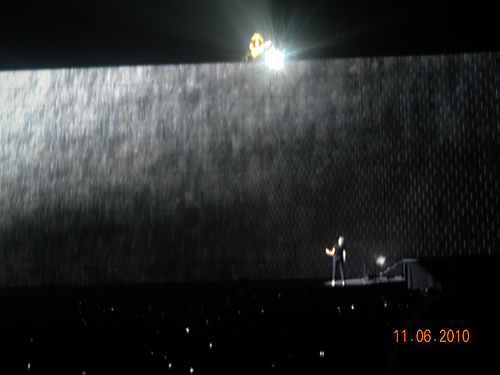 Comfortably Numb guitar solo on top of the Wall. 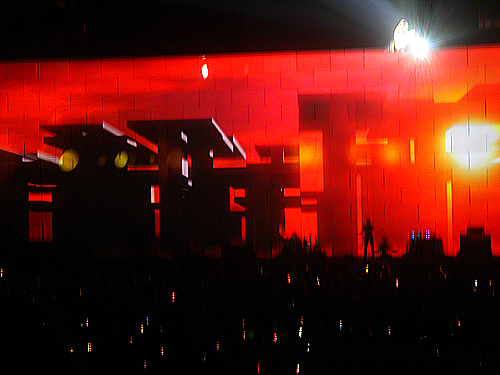 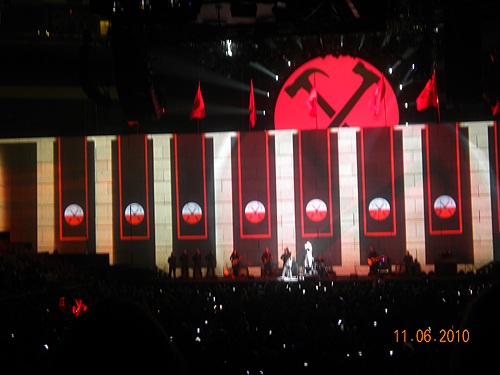 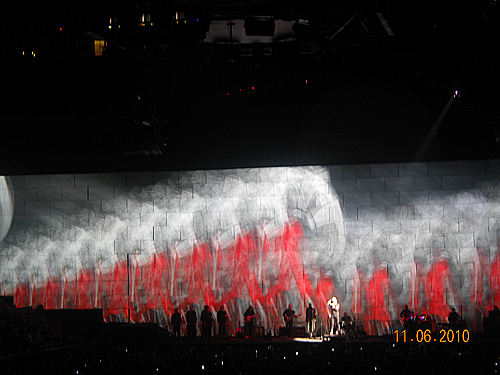 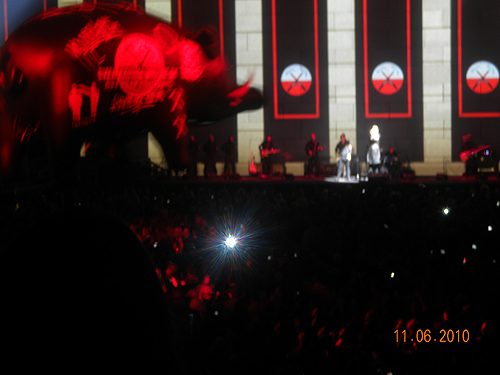 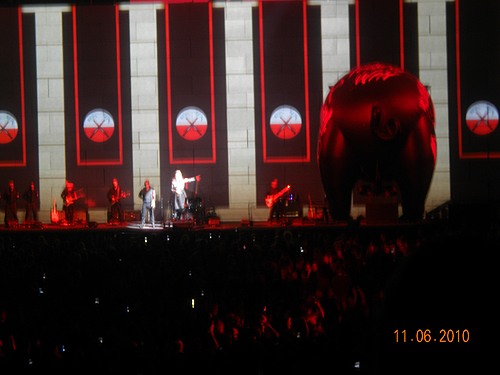 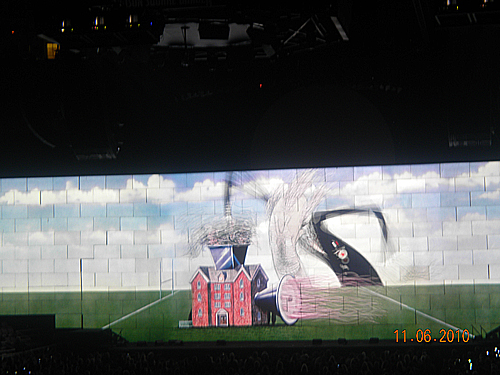 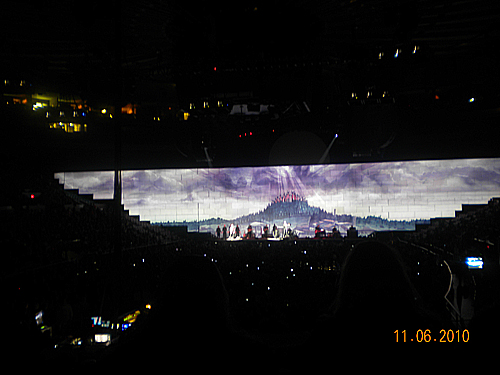 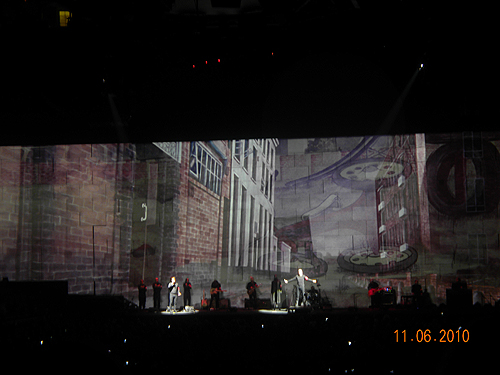 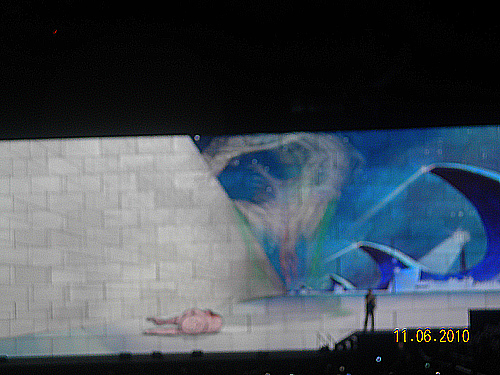 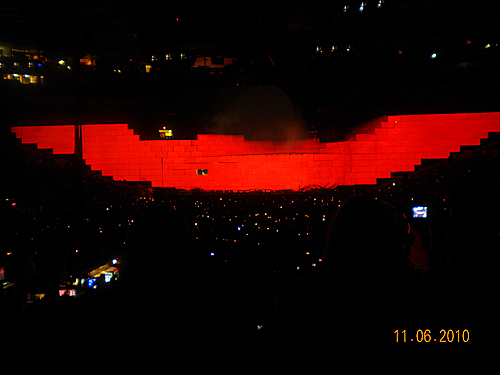 As the band chants "Tear down the Wall!" the Walls begins to crumble. If you ever get a chance to get Roger Water tickets to see him perform live, I highly recommend it! 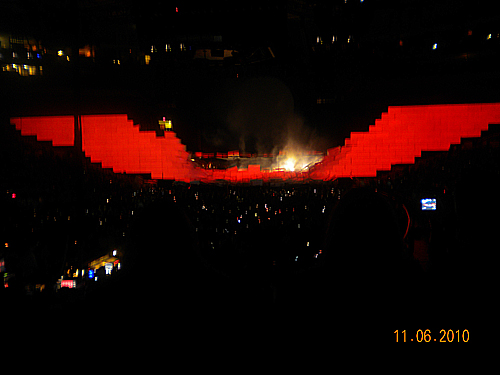 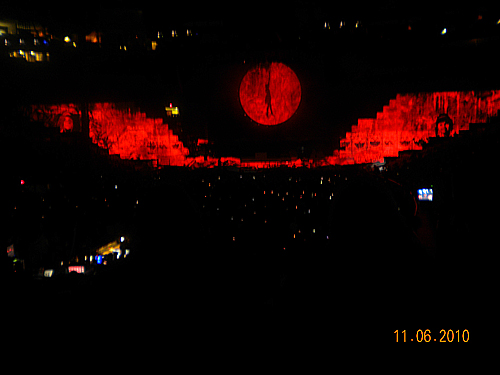 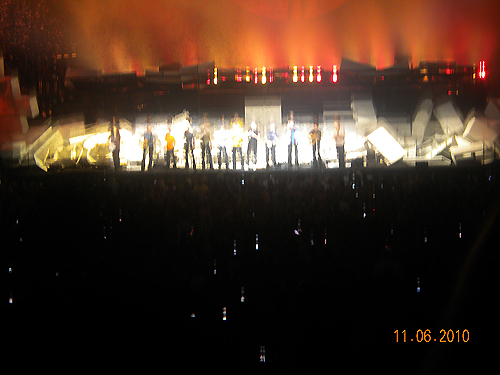 Outside the Wall and the end.